A Road is Not a Road in Mongolia 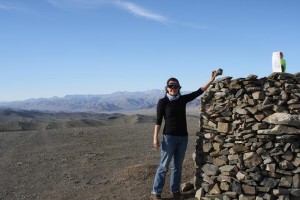 Despite the horrible past few days, we were determined to enjoy Mongolia as much as possible and to return to having fun on the rally. We drove carefully along the Mongolian roads, which cannot be fairly called roads at all, but are more like a suggested path through the Steppe. Often the road would end at a giant bolder and we’d go around it, or up a giant hill we’d have to make it up in first gear. The roads were mud or gravel, but not cement. We edged the car along doing 20 mph on a good stretch. Suddenly we were aware that we wouldn’t be making the final party on Saturday the 4th. There was no way on roads like this! That night we pulled into the first town, Ogli, by 6:00pm. We didn’t feel like stopping yet, but at the same time we needed a shower, a real meal, and if we drove on we could lose the main road and get lost on the Steppe in the dark. Since there are no road signs, you are pretty much guessing when you come to a fork in the dirt road.

We found a small ger camp with advertised hot showers for $10 a ger. We confirmed the price with the lady in the office after hearing it from a tourists who had been living in the ger for a few days. We threw our stuff in the ger, put the car in an ancient garage behind back, and set off looking for food. We found a Turkish restaurant other ralliers had recommended, and dined on lamb and salads with fanta. Not bad for the middle of nowhere. Back in the ger, we settled in and I took a shower. It was, perhaps, the coldest shower I’ve ever been in. It had slivers of ice in the water, which only came out of the spout but not the shower head so that you had to bend down and stick your head covered in shampoo under the tap of ice water. I was shivering profusely when I got back in the ger and climbed under all the blankets. I couldn’t stop shaking for over an hour. We hung out, Mike and Bill had a beer while I stayed warm, the shivers subsiding. Around 10:30 there was a knock at the door and two young women came in and demanded money. We asked what for, bored already by the game they were trying to play.

They wanted $10 a person for the ger. We were rightly outraged. We even had it written on a piece of paper that it was $10 a ger. After the past two days, this was too much. The two tiny girls tried to throw us out of the ger, but we were, obviously, too big to be thrown. They called their boss, who refused to listen and said he had lots of expenses and needed the money. I told him the shower was ice water, and unusable, and the ger was not insulated. He didn’t care or listen but demanded we pay the girls or leave. He hung up on us. We didn’t budge. After over an hour, we agreed to pay $5 a person or else. The boss man agreed, but not after a huge scene with the girls. I paid them, but wouldn’t let my hand go of the bill until the other girl brought exact change. They were furious, but also, you don’t’ barge into someone’s room late at night demanding they pay. What kind of hospitality or businesses sense is that? We were already sick of Mongolia, and we’d only been in the country three days. We fell asleep and in the morning got started around 10:00am since our car was blocked in by other rally team cars. We drove off, hoping to make it to the next town that night. 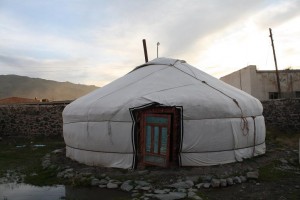 The next town was Khovd. Outside of town we saw a poster for a ger camp that was catering to ralliers. This could go either way, but we wanted to see who was there. Inside the ger camp we found five teams having dinner and talking about camping outside of town for free but using the warm gers now. Seemed sensible. We drove out of town to set up, but on the way met a team of 2 Norwegians who had picked up a stray Canadian and lost Irishman. They were towing a broken-down car with a giant Aussie and a disgruntled Irishman in it. They asked if we had room to carry one of them, but with our car weight already exceeding the max and nowhere for the person to sit, we had to decline. They were dropping off the Aussie’s car at the drop-off point (only one in each major town sponsored by the rally) and were then going back to the ger camps. We followed them there and had a great night getting to know the boys and hearing about their broken car. In the morning, we agreed to set off together in convoy after picking up a few more tires.

That morning proved the biggest scare of the trip for our team. The Saxo refused to go into first or second gear! The gear linkages had been falling out intermittently, but this was a first. We took it to a shop where it was magically fixed and we put on a new tire. Other teams were swapping tires at the drop-off point and after a few hours we were all ready to roll together. It would be nice to be in convoy again.

2 thoughts on “A Road is Not a Road in Mongolia”