It was in the depths of a dreary and cold winter in Beijing when Christmas hit, almost unexpectedly, amid family visits and mad rushes at the bar. The garland was hung, the lights were strung, and a fake fireplace had been painted on the eastern wall to give the dark living room the feeling of a home. But still, it never did feel like Christmas.

Christmas eve is a drinking night for Chinese, who remain clearly and openly confused about the contradictions of Christmas. Without a multi-episode series by the BBC it would be difficult to decypher how a baby born in Israel during a census year was related to a jolly man who dressed like a Bloods pimp from the North Pole. And how this all related to gift giving, midgets working as indentured servants, indoor evergreens and songs about sleighbells is literally anyone’s guess here. But it looks like fun, so the Chinese have adopted their own traditions: 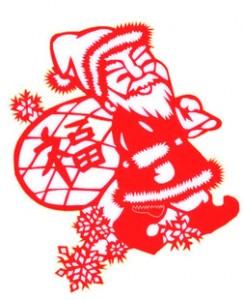 1) The words for “Merry Christmas” sounds somewhat like the word “Apple” causing many to gift apples to one another on the 25th. In Sanlitun, in downtown Beijing there were apples ornately wrapped in beautiful cellophane boxes retailing for 50RMB ($7) a pop leaving Mike and I wondering if apple sales wouldn’t be a better industry next year than booze.

2) The Chinese have observed that foreigners enjoy drinking profusely on their profound holidays. Take, for example, St. Patrick’s Day, New Years, Australia Day, Flag Day, President’s Day, Groundhog Day, Valentine’s Day and Thanksgiving. Thus, although foreigners are not out drinking on Christmas eve en masse, the Chinese have taken up the burden and march out into the bars with the grand scheme of leaving on a stretcher. This they do by ordering expensive scotch they don’t enjoy and chasing them with Blue Margaritas.

3) The Chinese have taken to decorating in somewhat a similar fashion to decorations they apparently saw in 1980s Christmas films from the deep south. Strings of lights are tossed up on trees and bushes in hideous colors and in all manner of flashing, vibrating and noise-making variations. A favorite decoration is a close up cut-out of Santa’s jolly face, only his eyes have been adapted to appear more Asian, and his mustache is pointed like Stalin’s. Still, it’s a comical, if not inspiring adaptation of the jolly man’s mug. One particularly bad copy of a Christmas tree involved a massive cone shape covered in purple, vertical lights and interwoven with neon purple ribbon. The cone was decorated in magician stars and moons. The cone was about three stories high and despite being the most unsightly cone ever erected, was a favorite spot for local “Christmas photos.” One that gets points for creativity is a rendition of a tree that was so creative it goes in the “creative” pile and not in the “epic fail” pile. It consisted of three Chinese lanterns covered in vertical lights with a star on top. Props to that one! (image below). 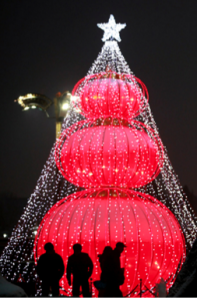 Christmas day can come and go in China without noticing. There were no major special events, though several large hotels held tree-lighting ceremonies full of pomp without circumstance. And these same hotels capitalized on the holidays by offering singularly outrageous meals for those unfortunate enough to be lodging solo for the holiday.

At the bar we got a special treat on Christmas. A band of merry (via drink) carolers were going from bar to bar in what they called a “caroling pub crawl.” This is a tradition I’d love to see catch on. They had guitars and great vocals, and had a few shots of courage before belting out “Oh Holy Night” and a somewhat confused version of “Oh Christmas Tree” that started off in German and migrated, once it was clear no one spoke German in their group, into English. It was a magical, Christmas moment that smelled of eggnog, and sounded like home.