Across America by Land

Not many people make backtracks like we do! To make my point, our trips inside America in the last several months 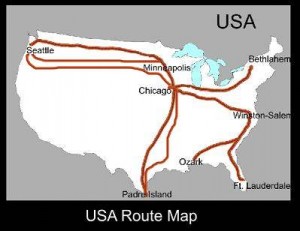 have been hectic, repetitive and somewhat ridiculous. Just look at that map! We landed on the east coast, managed to make it to Illinois, only to jump to New Hampshire and Washington, back to Illinois, then to Texas, back to Illinois, then to Washington again. make any sense to you? Yeah, us neither. And we did it ALL by land only, no air travel. If you ever want to hear our opinion of Amtrak or the Great American Road System, pleas ask. We’d be happy to monologue for you, and since Mike plays the guitar, he can even do it to song, if that’s your preference.

I have to confess, a huge portion of America has been neglected in our ridiculous travels, and that area is boring– which is why we didn’t go there (California, Oregon and parts of Nevada exempted). I’d love to see the Grand Canyon, but they located it in the middle of nowhere, so until they get some interesting side attractions out there we’ll be sticking to the more densely populated areas.

One of the amazing things about ground travel in the USA is the gas prices. It can be high in, say, Seattle and low in DC. Explain this to me, someone please? Why do the people along the coasts, where oil is delivered, often pay more?  Isn’t Canada our biggest oil supplier? Why do northern states pay more than southern ones? Check out this map of gas prices in the USA– see a trend?

Another thing that surprised me was the tax rates in various states we traveled through. Texas, for example, had an 8% sales tax rate while Arkansas was 9% and Missouri was 7%.  Property taxes is not taxed, but everything else is. Washington has a $9.00 minimum wage while Wyoming gets a mere $5.15 an hour. Some states don’t even have minimum wage standards. Emma Goldman would be sad.

Nevertheless, the trip was amazing. I’ve never seen so many MAC trucks! Ya know, America, a railway system might solve the over-congestion of the roads. I’ve also never seen so many fast food restaurants. You see a lot of interesting folks in sweat pants at the McDonald’s, or rummaging in the trash at various rest stops. We even saw one man get out of the driver’s seat of his RAM truck and finish his beer then toss it in the trash before peeing in the grass NEXT TO the bathrooms. Also, at any given interstate gas station you’ll find a plethora of items for sale that no one would, or has ever bought. Like neon pink mud flaps with a naked woman outline on them. And the gas station check-out guy is always eating or spitting sunflower seeds while you try to check out.

So, the cross-country ridiculousness went well, and we’re in Washington now. believe it or not we’ll be heading back to the Midwest soon enough– enhancing the backtrack.

2 thoughts on “Across America by Land”