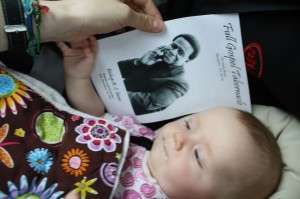 By Al Green we do in fact mean the amazing, talented and smooth creator of “Let’s Stay Together” and “Love and Happiness.” He is one of gospel and soul’s biggest names and he recently went on tour. Sadly, we missed it. But we did hear that he was the reverend at the Tabernacle Church in Memphis, so we got up at the crack of dawn on Sunday and headed for Memphis, leaving lovely Nashville in our rearview mirror.

We drove by Elvis Presley’s Graceland, and were surprised at how rundown the area was, and how kitschy the place looked. I know it’s Graceland and it’s meant to be kitschy but wow! Not far from where tours leave for Graceland you’ll find the Reverend Al Green’s church.

We pulled into the parking lot and saw several people heading inside. We followed them in and opened the doors to the sanctuary to reveal that we were one of about eight white folks in the room. They were already well into the service (which started at 11am) when we arrived at 30 minutes after the hour. We took seats near the back in case our infant started to howl.

The music was amazing! Al Green wasn’t there yet, but his choir and choir leaders were stellar. They sang almost on improve and the live band was equally astonishing. You could tell they loved what they were doing. They sang their prayers.

At noon Al Green came out in white gloves and a black reverend smock. He swayed with the music and received applause and turned all the applause upward. He was very humble and deflecting of attention. His mother led the announcements, and his nephew gave the sermon. Al Green was the greeter, occasional singer and commentator. As we gave tithe he asked us where we were from. Mike said “Chicago” and he started singing “hello Chicago!” as we walked by. Nice guy, and a very friendly congregation. He even made a “Love and Happiness” reference. Nice.

We left Memphis after church. Driving around downtown proved that the city itself has a lot to be desired, especially after the beauty of downtown Nashville.