And the ATC Team Crosses the Finish Line!

The Citroen Saxo was literally breaking in half. Our previous day’s welding was only a band aid on the larger fact that the frame was splitting in half, right down the middle. We had already removed all excess weight, and were riding with the three lightest people in our car, Mike, Lauren and Chris– a man from Southern Ireland who had a pension for story telling. 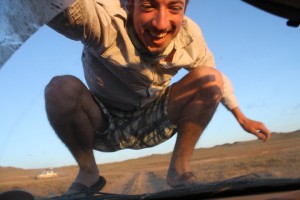 All of us expected a hard ride ahead, but after the welding at the last drop off point, we were riding in high spirits and having a blast. Chris jumped on the roof of our Citroen and rode, zip-tied to the roof, for over an hour. Watching the sunset behind us as we raced for the finish line, it was a highlight of the entire trip. 9 people in high spirits with the future ahead and trials an tribulations already behind us. Even if the cars exploded and died on the spot our mood couldn’t be ruined. Watching the sun set, with our cars weaving in and out of the light, our roofs covered in screaming and ecstatic ralliers, we were euphoric. We had less than 500 miles to go, and 200 of those miles would be on hard pavement, we learned. We were almost home free! 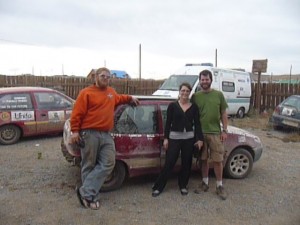 As the roads worsened (and we had heard roomers that they got worse before they got better) we noticed new sounds emanating from the Citroen. We took out even more weight, and only Chris and Mike were left in the car. Lauren rode with the Norwegians, Bill with the Aussie in his Suzuki Swift. What happened next was as unfortunate, but still proved interesting. Somehow, driving through the night, the Norwegian car got separated from the group. I was in that car, and we reached the pavement around 2:00am. we looked around, eager to celebrate the end of the bumpy roads, but the other two cars were long gone. We didn’t know if they were ahead of us or behind. After taking a vote, we decided to wait on the edge of the pavement until morning. I didn’t sleep at all, and at first light I was flagging down cars with messages scribbled on bits of trash. I asked each driver to take a note to the cars if they saw them ahead. The notes just had our location and the time. I showed the drivers pictures of the missing cars on my camera and then waved them off. By mid-morning a Chinese driver told me he’d seen two red cars broken down about 50 miles ahead of us on the pavement. We all jumped in the car and were ready to pull out when, from behind us, the Suziki Swift pulled up and Bill and the Aussie jumped out. They reported that the Citroen Saxo, the fearless ATC car, was finally dead. It had died during the night sometime, the engine having seized, the oil and gas filters both filled with dust and sand. It wouldn’t even turn over. It was scrap metal, they reported. Mike and Chris were back with the Citroen trying to get a tow from a passing trucker. Meanwhile, and to double the trouble, the Swift had a leak in the gas can. I jumped in the Swift to translate (in case they spoke Chinese) and we rushed to the next drop-off town some half hour down the road. The Norwegians went back for the ATCs dead car. 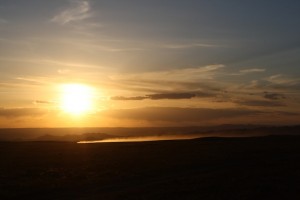 With the Swift, we had the gas tank patched and called the Adventurists’ contact in the city to report that the ATC car was on its way. The contact arrived, a lovely vegetarian, Christian lady– a double oddity in Mongolia. The Swift headed back to pick up the Norwegians and the dead ATC car. Meanwhile, she took pity on me, as I was pitiful, and took me to her vegetarian restaurant. She made me lunch and I ate with her and her family. She then dropped me in free room at her upstairs hotel. I napped for four hours. When I woke up she made me tea and talked to me about becoming a vegetarian. To be honest, it was surreal. Finally, as dusk was approaching, I heard the three cars pull up and my 8 team mates jumped out and we began to rip the ATC car apart. We sold a lot of the interior goods to the vegetarian and her husband. The rest we had to trash. We put four in the Swift and 5 in the Norwegian Fiat (some on the roof). That night was the last party for the finish line and it had long been a goal of ours to make the party. The Norwegians put their foot to the floor and we were bumping along behind the Swift as fast as possible.

It was midnight before we reached Ulaan Bataar. We saw it in the distance, an orange glow in the sky up ahead, and cheered. In the Swift, Phil the Aussie, Mike, Chris the Irish and I were all choking on the horrible smell from Chris’ shoes. It was so vile that Phil eventually slammed on the breaks, in sight of the city and the finish line goal, and threatened to toss the shoes. He even pledged his last beer to wash them out, anything to kill the smell. I’ll admit, it was rank. But with the city so close, it wasn’t that big a deal. It was hilarious to watch Phil stomp around as he got Chris’ shoes and tied them to the roof, before peeling out and re-joining traffic. 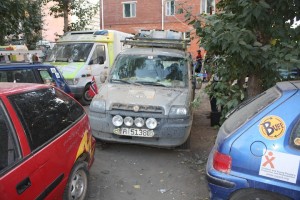 In town, we were all euphoric about finally reaching our goal. Bill crawled on the roof of the Norwegian’s car and, not surprisingly, they were pulled over by the Mongolian police and warned. The Swift didn’t wait to see the punishment. Chris was driving and he took that moment to admit he didn’t have a driver’s license and the car wasn’t registered to him! We panicked. The odds of not getting pulled over for a bribe or minor offense were extremely low. Nevertheless, we forged ahead looking for the finish line. Bill crawled back on the roof of the car and was pulled over yet again, this time within sight of the finish line. The cops were not as friendly this time, they took Aslan, the Norwegian driver, and kept his passport, setting a disciplinary meeting for the next morning.

We jumped across the finish line to see only one other team sitting around. They reported that the finish line party was over. There was no one around but the cops who had arrested Aslan, which put a sour taste in our mouths since we were, after all, here to donate a ton of money and cars. We walked around town for a while, eventually returning to the bar near the finish line. We met up with a few other teams around 2:00am and had a nice time celebrating our finish.

Looking around at the other cars in the finish line holding pen, we were happy to see friend’s cars from along the route, including the Face Race team and Mongol Schumachers, both of whom we caravanned with for the first half of the rally. It was like seeing an old friend to see their cars there.

43 days on the road, 10,000+ miles and we had finally made it to the finish line. Sure, some of us were arrested, one of our cars didn’t make it, one passport was missing and we had no where to go for the night, but we were happy and excited to have made it across 1/3 of the globe by land.

Next– ATC spends a week in Ulaan Bataar… why?

2 thoughts on “And the ATC Team Crosses the Finish Line!”