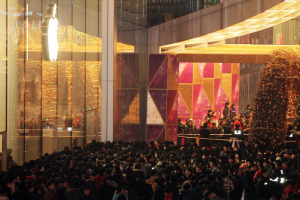 The other day Apple was set to release the new iPhone 4S in China. What transpired has hit news stands around the world, so I’ll only summarize briefly. A crowd of around 1-2,000 gathered in Sanlitun at the shiny Apple store the night before the new phone was set to release. In the morning, having waited through another blistering and dangerously cold Beijing night in the depths of winter, there were too many people and not enough phones. The police showed up and announced that the store would not be opening to protect the people, the employees, and the store. Some people were paid to stand in line all night, with no reward if they returned without the coveted phone. Needless to say, the crowd turned mob and pelted the store with eggs in disgust. Here’s a longer version of the story by the NY Times. Apple iPhone sales are now banned in retail outlets and will only be released online. Good move!

This isn’t the first time we’ve had an embarrassing mob problem with Apple in Beijing, and not even the first incident in the last few months. Not long ago two citizens got in a fist fight at an Apple store over the last available iPhone, a fight that resulted in one man being hospitalized and a broken window. As a result of the fight, the Apple store now has more security than the queen’s crowned jewels. These giant, well-trained men stand without blinking as they monitor the interior crowd as well as the exterior. They even have a frisking station, and the number of security cameras has doubled.

Then there was the saga of the fake Apple stores, where some of the employees working the fake stores didn’t even know they were not legit. The fakes were so good, and the shops designed to replicate real Apple stores, that customers, employees and clearly officials were all fooled. Someone wasn’t, however, and the fake stores were quickly shut down. Anyone who has spent time in China knows they will be back, but for the time being with media hype high, the fakes are temporarily on hiatus. 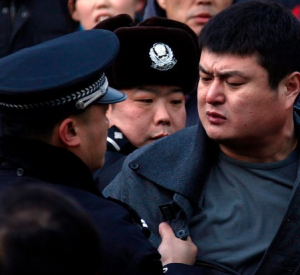 But that isn’t all! When the released the previous iPhone version the line was so massive that it stretched through the Sanlitun village, congesting traffic, resulting in scuffles and fights, and generally disrupting the entire area. So many people went without the phone thanks to migrant workers who were paid to stand in line to acquire the phones in bulk for sub distributors. To this day you’ll find men and women standing directly outside the Apple stores hawking the iPhones they bought on the release date, for an increased fee of course. These peddlers are not only annoying, but it’s hard to watch how desperately they tried to push the phones in the run-up to the 4S release.

What is it about Apple products that drive the Chinese crazy? Sales in China account for 1/6th of all Apple sales, but there are only five stores in the country. They are packed every day of the week with more of a curious mob spending their hard earned cash than the new rich or wealthy. Even those who can’t really afford it save up for months to have the latest gadgets.

But what we learned from the Apple staff is that nearly all the folks who buy the Apple computers and phones have no idea how to use them. The technology is so new in China that they can’t turn them on without detailed instructions. Thus, nearly half of what Apple does in China is training courses for new Apple buyers. This is a brilliant strategy and Apple is truly one of the best success stories in terms of breaking into the Chinese market with huge brand recognition.