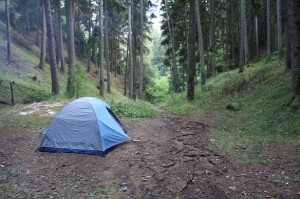 Camping in the Park

Bjormi National Park is a colossal nature preserve covered in a criss-cross pattern of winding eco-trails and camping grounds. For 5 GEL a night, we could camp anywhere in the park as long as we registered in advance. When we arrived in Bjormi, the registration center was closed for the weekend (thanks, Lonely Planet) but a friendly guard called the English-speaking receptionist who explained to me that we could spend one night in the reserve and meet her in the morning to register. We hiked, with all of our stuff, along a 3k trail that made a loop into the wooded reserve from the registration center on the fringes of town. About 1k into the trail our 50lb bags were weighing on us, and sweat poured from our brows in streams. We set up camp atop the wooded hill, and Mike set off to find fire wood while I read and stayed with the bags.

Around twilight I set up the tent and built a fire pit out of rocks that were strewn about the campsite. I broke down the fire wood into manageable sticks, and set up the interior of the tent. Darkness was approaching, so I got the Ramen dinner ready for the fire, then spent about thirty minutes pleading with Prometheus for fire. Mike had hiked into town for some snacks and wine, and when he returned he got the fire roaring via a clever trick he’d learned in Mongolia about using bark rubbed together in paper as kindling. We cooked our Ramen and gagged it down, having eaten the same Ramen meal multiple times already that week. We sat around the fire singing, chatting and listening to the forest around us. We were a bit paranoid about the black bears that live in the reserve finding us and thinking we looked just tasty enough to eat, but the wine solved that paranoia easily and we headed to bed when the fire turned to embers.

In the morning two hikers came upon our tent along the trail and loudly complained that we were a messy bunch who had wreaked the forest. Readers, upon our arrival the campsite was a mess, and obviously we didn’t leave any of our trash about. We even picked up other people’s trash in our bags to carry out. What we didn’t pick up were used, dirty dippers that were up on the hill side rotting, or other disgusting, partially biodegraded objects. The hikers yelled for us to clean up our mess and then stomped off without picking anything up. We got out of our tents and packed up our stuff and climbed down to meet the receptionist at 9:30, as we had previously organized. She never showed up, and the two climbers came down the trail behind us showering us in glares. Obviously we had no baby with us, did they think the dippers were really ours? Idiots! Need I point out that one of them was French? 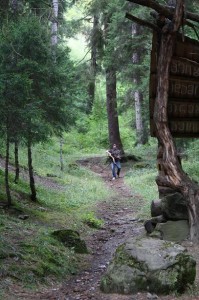 At any rate, with the idiots behind us, and the receptionist nowhere in sight we tried to register to go back into the park but the guards would have none of it and sent us packing. When it was obvious we would have to wait until Monday to get into the park again we decided to leave Bjormi and head west. We walked into town and waited at the bus stop in a bummed-out mood. An elderly man in a fishing cap approached us and when we told him we wanted to go to Kutasi he told us to come back at 11:30. We found breakfast in town and returned at the appointed time, the old man had flagged down a passing van for us and had even rearranged the van passengers so we were sitting in the front seat with the driver. The driver was friendly enough, and kept telling me how much he adored Arnold Swarzeneggar. I used my limited Russia and he used his limited English and Russian, and we had a bit of a conversation as he peeled along curves that would kill us all if his attention shifted even a hair. It was a four hour drive to the next town, and I was petrified most of the way by our driver’s complete lack of concern for the drop-offs to his right or left, and with the screaming and wailing of the 25 passengers crammed into the 16 passenger van. Obviously, since I’m writing this, we made it to the next town without incident.

One thought on “Bjormi National Park”