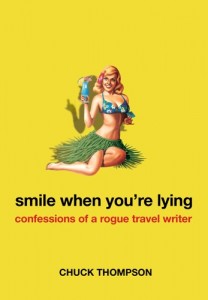 Chuck Thompson is an infamous name in the travel industry. He has been a long-time critic of how Americans perceive the rest of the world, that is to say – as a series of isolated resorts in various exotic locations ripe for development and full of charming tanned locals. Thompson’s uniquely bitter tone throughout the book lends to the overall sarcasm of his message– that the travel industry is flawed and presents only the best and most cheeky aspects of international forays.

In Smile When You’re Lying

, Thompson gives perky little insightful tales from his own past that involve excessive amounts of cocaine and marijuana done with Alaskan State Government officials, various visits to go-go dance halls (aka brothels) and a ridiculous amount of drinking with all sorts of unsavory characters. Despite this, he manages to weave an attention-grabbing tale of what it is like to travel as a rogue (albeit flawed) writer, a tale that leaves me wondering what his wife (mentioned in only half of his trips abroad) thinks of his new book.

His brief stint as the editor of Travelocity Magazine gave him the push he needed to launch his travel writing career to new heights. While he has a job most travelers can only dream of, he does little but mock the industry, scorn the results of travel, and defend what “it used to be like” in Thailand, the Philippines and Alaska. Nevertheless, the book’s writing is top notch and the illustrious wordsmith has traveled to over 35 countries on assignment, making him one of the better researched travel writers in the business, and a very lucrative one for him at that.