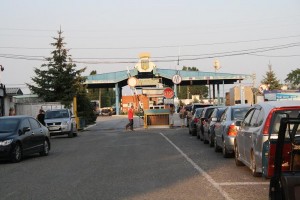 We anticipated a bit of hassle crossing the Ukrainian border into Russia, but we in no way were prepared for the events that transpired when we finally reached the Ukrainian departure point and the Russian entry border. It was 6:30pm when we pulled into a line of cars to exit Ukraine, the line stretched from the gates ahead of us which were barely visible, to well behind us only minutes after our arrival. We got out of the car, as did members of the Mongol Schumachers and the Face Race team. When we needed to move forward in line we all pushed our cars in neutral—making quite a scene for the bored Ukrainians milling about drinking beer and waiting their turn in line.

Finally reaching the front, we were given the royal treatment. Out three cars were pulled over to a special spot while we filled out our customs forms. Bugs were out in full force and it was still over 90 degrees. We were all drenched in sweat, and, having not found a shower for the past three days we were not exactly an eye-pleasing sight. It was no wonder, then, that the border guards gave us wary looks as we scribbled our information down and collapsed on the hood of the car. We got our passports stamped and, headed to the next window. Three guards asked me for a present. I said I didn’t understand and flashed my best ‘don’t I look like Drew Berrymore’ smile. They smiled back and said, “You know, Thomas Jefferson is my friend. All the presidents are my friend.” I smiled and said they were my friends too. What a creative way to ask for money, really. I wasn’t unimpressed. The guard held up a small Ukrainian coin and said “Thomas Mark, you have?” Bill and Mike, having come up behind me, interpreted this to mean he was a coin collector. Someone rushed to the car and found a nikle that had been rolling around the back seat for the past two weeks. The guard took it, laughing, and then asked for a coin from the British team behind us. Perhaps he really was a coin collector. So, after about 2 hours, we were officially out of Ukraine! Does a nickel count as a bribe? I’m going to say no on that.

We drove off, it was dark now so we rounded a corner and were confronted with an unwelcoming sight. The line for the Russian border was as long as the Ukrainian one had been. We got out of our cars and snacked on food found in the truck or between seat cushions. We played games, told stories and all the while we pushed our car down the line. Finally at the front, we got stamped into Russia and we piled back into our car, shocked at how easy the crossing was. We had heard it would be the hardest border yet, and one that no one could make it through without paying a bribe. As we sped the car up we exchanged smiles and then, when a customs official jumped in front of the car with a waving flashlight, we watched each other’s smiles turn into straight lines.

We were instructed to pull the car into a dark parking lot with no cameras or lighting. A dog was in a nearby cage barking at the stray cats that strolled by tauntingly. Bill, who has the car in his name, was sent to talk with the guards alone. We waited….and waited….. we played with the cats and dogs, we counted stars, we exchanged life stories with members from the other two rally cars, and we even got to the point of collapsing on the hood of our cars again, preparing to nap. Finally, Bill returned having paid no bribe but having purchased our auto insurance for Russia. Two guards accompanied him to the car with flashlights. “Here it comes.” I thought. I knew we have booze in the trunk (what respectable rallier doesn’t?) as well as a few strange items like a hatchet and pocket knives which I was concerned might raise questions. But, the guards were our age and very jovial. They asked if we had a present for them, and we said we didn’t. They asked for a small bottle of booze, so we offered them cigarettes, which they didn’t want. They saw a bottle of beer we had picked up in Romania for free, and the younger of the two officers stuck it in his pocket and said, “this is gift for me.” Since it was a skunky beer that had been in a heated trunk for 4 days we were happy to have it disposed of, and smiled as we shook hands and said our farewells. Does a beer count as a bribe?

3 thoughts on “Border Crossing with Russia”