Bratislava, Slovakia and the Giant Chair 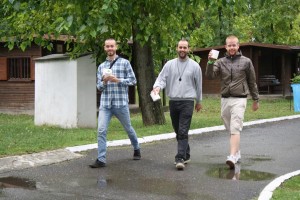 We arrived in Bratislava that evening after leaving Vienna. We heard it would be cheaper in Slovakia than Austria, but a quick consultation with Hostel World proved otherwise. We did manage to discover that there was a large camp ground near the city. We asked for directions and followed them….almost. Somehow we overshot the campground by over 30km! We turned around and headed back towards Bratislava. Before we could get far at all, however, angry clouds to the south started to swirl and bark. Having grown up in the Midwest, Mike recognized all the signs of a tornado about to touch down. Cool and warm wind whipped the side of the car and our pirate flag was whipping so wildly we thought it would rip right off and fly up into the black clouds. Slowly, a funnel formed from the largest cloud and it arched its way down to earth.  Our cars were racing along the highway back towards town but the sky was growing dark so fast and so suddenly that many of the locals were pulling off the road to wait it out. Recognizing that waiting in the path of a tornado was a bad idea, we forged on at full speed. 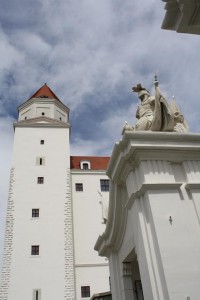 I pulled out the video camera and started filming just as the rain started to fall hard against the car. There is no sound on earth quite like heavy rain on metal, it comes down like bullets and lands with a thud for each drop. I yelled into the camera but the rain and wind was too much to be heard. I turned the camera around to the car behind us and although I knew it was right behind us, it was not visible.

Everyone was pulling over. Our radio walki-talkie buzzed and the Face Race team said they were pulling over. We kept on ahead for several more minutes, eying the clouds. The funnel had touched earth and played around in the field as if just interested in picking sunflowers and swallowing them whole. Not being a meteorologist, I’m not sure why the tornado retracted back into the cloud when it did, but we watched it retract its fingers full of flowers and disappear. The rain continued for several more minutes and then abruptly stopped. Once it was clear again we easily saw the sign for the campground (we had zoomed right past it!)

We bought one bungalow for all 6 of us and then we all headed towards the showers. There are few things more wonderful than a shower after a long stint of camping. My joy was cut short as the water was ice cold and lasted less than one minute. With shampoo in my hair, I pushed the 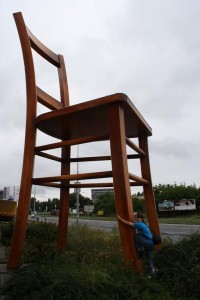 button and nothing happened. I kept pushing it and eventually a small stream of water trickled out. I rinsed off as best I could then went back to announce the lack of water to the group. Groans went up from the masses of angry, dirty ralliers so we grabbed a few coins and headed to the bar. At one Euro a beer, these were the cheapest prices we’d seen yet. We grabbed a few drinks and a meal on the camping compound and it turned out to be a very nice evening.

In the morning, we packed up and headed east towards Budapest. But on the way out of town we saw something that caused our two car convoy to screech to a halt. A giant wooden chair sat on the side of the road, no signage or explanation. We, of course, tried to climb on it and failed. In case you were ever wondering, we think Bratislava holds the record for world’s largest chair.