In Shanghai, at 7:30am on the 5th of November (8pm on Tuesday on the east coast of the USA), over a hundred tired but eager Americans sauntered into Malone’s Bar, an American establishment, to watch the CNN election results. We had taken the day off work to gather together as strangers to witness what many of us knew would be a historic occasion. As the bar slowly began to fill with diverse faces in an array of colors and ages, I began to shake with anticipation (perhaps from the coffee, but also from the idea that this day could change American history forever). By 8am CNN was gearing up for the close of the first east coast polls, and the first projections came in amid cheers.

A young black lady in an Obama T-shirt handed out posters of the candidate while circling the bar, patting recipients on the back with a friendly, ‘good for you’ whenever someone raised their hand for a poster. In China, where racism is strong, her very existence in the city was encouraging.

A full breakfast platter was 88Rmb, an auspicious and lucky number in China, and a sign for the candidate’s performance later that day. We ate heartedly, drank tea and American coffee and watched as the results rolled in amid holograms and virtual capital pop-ups.

In my life there have been two political experiences that have made me shake with emotion and a precise fear of the unknown. The first was in 2001, when I stood outside an empty classroom wondering where the other students were before a tired and red-eyed boy filled me in on the morning’s details. The second was sitting in an over-crowded American bar on the 5th of November, 2008 when Obama was announced the victor and a stranger nearly knocked me to the floor while hugging me, his whole body shaking, tears running down his face. Men and women cried, screamed and then—there was a silence like I had never known as two years of emotion and waiting after 8 years of being embarrassed to be called an overseas American, flooded into the room and silenced us all.

After the silence returned to cheers, and then silence again, we filtered into the sunshine (by then it was nearly 1pm) and wandered around the city, bold and unafraid to be called Americans. 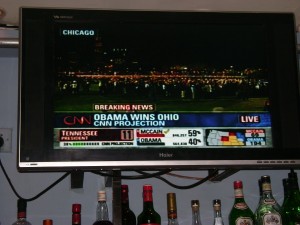 That night at a celebration party on the Bund we were served Obamatinis and The Change has Come Cocktails with CNN in the background and a mood that was somewhat more serious than the morning, but still a tinge of excitement and unity. Even those who voted for McCain were out chatting happily about change. The change did not imply from a republican to a democrat, but from a failing sense of what it means to be American, to a reminder of what we as a country stand for.

The thing most impressed on me was the willingness, vocalized loudly and clearly, of Americans back home and abroad to work together to rebuild America. It is not, as some suspect, the worship or idolization of one man, but instead a return to the ideas that America was founded upon. I am happy that America now has an African-American president, but for me the real triumph is not that aspect, but the fact that he is a symbol for the reinvigoration of a faith most of us had lost in our country. I felt pride not in Obama, but in Americans. The person who hugged me at Malone’s that morning was a gay man whose faith is indeed in change as an American concept, not in Obama himself. That is what is unique and beautiful, and why I feel like last Wednesday is a day I will never forget, much in the same way I am unlikely to forget 9/11.

Since that emotion-charged day, I have watched as headlines across China have praised the choice of our next leader. What the Chinese admired about Americans is now returning: an unwavering faith in humanity based on principles of freedom, equality and the pursuit of happiness. Across the world we are seeing headlines of the same nature, the world is ready to be wowed once again by American idealism and American dreaming. The world wants us to exist, to live and enjoy freedoms and happiness to prove that a sort of utopia can exist on earth. Though a bit hyped up, I do believe that this I what people are looking for in our country across the pond, and what I hope we can prove by banning together and imagining ourselves responsible enough to create the future we design. 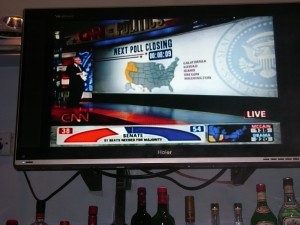 Today I’m proud to say I’m an American. Something I have not said in a long, long time.