Camping outside a Bulgarian Monastery

We spent a day in Plovdiv walking around and admired the Old Town. Luckily, we met a couple from Australia who were on a honeymoon-backpacking trip, which was interesting in itself, and they had a guidebook specifically on Bulgaria. Matt and Lauren perused through the “around Plovdiv” section and discovered several things that were not even in our guide. We decided to go to a Monastery that was only about a 40-minute bus ride away. Once we announced that we were going, we ended up with a whole group of people interested in seeing the Monastery.

The next morning we got up late and left even later after gathering everyone together. We took the long way to the bus station and walked around the alleys of Plovdiv for a good 30 to 40 minutes before we arrived at the bus station. It didn’t take long and we found the bus to the Backhovo Monastery for a pleasant ride South. We played 3-person cribbage and I, of course, lost again on the way to the old Orthodox site. Once we arrived, it was only a short walk up the hill and we were already at the church. There were several Orthodox clergy walking around the grounds. We had all been told that it was possible to stay (sleep) in the monastery so we were all carrying our packs along with us. Unfortunately, no one was really willing to put us up inside or out, and they directed us to a hotel towards the bottom of the hill.

The monastery was nothing special and looked just like all the other Orthodox churches we had seen; The exception being the surrounding building, which looked like lodging for a large number of worshipers / clergy. After looking around, we all got really hungry and returned to the foot of the hill for a quick lunch. The honeymooners decided to head back to Plovdiv. They looked pretty disappointed with the excursion when they left. However, Matt, Lauren, another traveler – Tim, and I decided to start up the modest hiking trail. The monastery had been slightly disappointing so we ascended with lowered expectations. 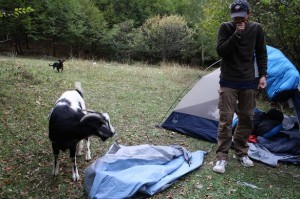 We saw a few other buildings, which were closed down for the season, and continued to hike past obvious camping grounds that had signs NO CAMPING everywhere. Several hundred meters father, we came to a huge clearing that was amazing. The leaves were just starting to change, and we found ourselves in the middle of a vast field, flanked by mountainous treed hills. After admiring the view, we were all invigorated to go on. Next, we came across an Orthodox pilgrimage site up the hill. It was a tiny chapel surrounded by massive Tim Burton – esc trees. There was a pool, feed by a natural spring in the middle of the chapel. The whole experience was becoming a little surreal, after the ordinary morning, we had all experienced.

Farther up the hill we came upon another small wooden chapel built on the side of a cliff and beyond that, yet another church at the top. The inside of the church had beautiful frescoes and paintings, as did the other chapels. Perhaps I appreciated this more because I had been in China and Central Asia so long, but it seemed to me that the church and chapel were buried in a very dense forest. After months in the deserts, we shared great moments of happiness walking through the forest paths.

Tim, although impressed with the location, was in no position to camp – as he had intended to stay at the monastery overnight. After a quick warning about how cold it was about to get, Tim departed to catch the last bus back to Plovdiv. Lauren, Matt and I stayed and we immediately got to work. Lauren set up a campsite, then kicked up her feet while Matt and I collected firewood for the next hour and a half. After collecting enough firewood, we got ready for the fire, waited for dark, and then started up the fire. Luckily, Matt brought a water purifier, so we went to a nearby waterfall and purified some water for cooking. We all sat happily around the fire, which burned for the remainder of the night – fortunate because it was really cold compared to the nice weather we were used to while in Turkey.

One thought on “Camping outside a Bulgarian Monastery”