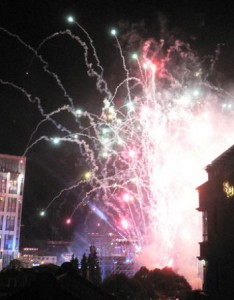 In 2008 we lived in Shanghai and had the amazing opportunity to stay in the city over the Spring Festival (the Chinese lunar New Year). Since so many migrant workers and others had fled the city for the holiday (which is akin to Thanksgiving where everyone goes to their home state for the festivities) we thought nothing big would happen. It was freezing, it was deserted, and we didn’t expect much.

In the end, nearly ever remaining resident in the city came outside at midnight to blow something up. There were fireworks covering every inch of the sky! Old ladies wheeled themselves outside in their wheelchairs to light off fireworks and then, giggling, rolled back inside. You could buy fireworks at the 7/11, you could buy them from old ladies with carts full, they were everywhere. At midnight on the first day of the new year, the city erupted and it seemed to linger in a state of haze and loud bangs for several days. 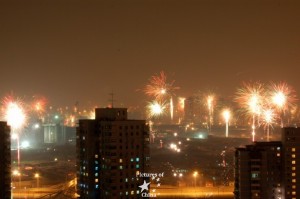 Now its the start of the Spring Festival 2011 and we are in Beijing. It is the year of the rabbit, and thus a fortuitous year for many. The festivities were to start on midnight of the 2nd of February, 2011. We had the same concerns as we did in Shanghai several years ago as we watched nearly every shop around our hutong home put up shutters and hang signs saying “will return on the 7th.” The city was growing empty, like the set of a zombie movie. The once busy streets were now barren save for a few random cars and the poor bus drivers, whose massive slug-like machines trolled the streets in vain for people.

It was hard to find fireworks in Beijing, at least compared to Shanghai where they were everywhere. Now there were well maintained booths with knowledgeable sales staff. Prices were printed on the fireworks and fire extinguishers lined the sidewalks behind the stalls. Something massive had changed since the haphazard array in 2008. We bought a bag full of random fireworks and, when the second of February arrived, we strolled down deserted streets with a lighter in one hand and a bag of fun in the other. 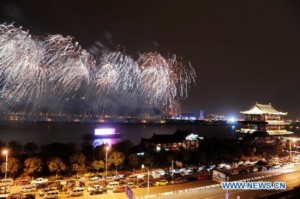 We wandered for a while, a small group of us with our bags of fun, before settling on Hou Hai Lake as our destination of choice. We set off a few simple fireworks with limited competition. The police watched but didn’t say anything, just leaning on their police cars watching the fireworks against the dark sky. At midnight, the story changed entirely. The city erupted in a magnanimous and otherworldly explosion that shook water out of the lake like nudging a cup of coffee too hard. Fireworks exploded from every corner of vision, and the booms were so close together that it was essential one giant BOOM for half an hour. We set off our remaining fireworks and walked around the lake, dodging fountains of fire, escalating rockets and other projectiles at high speeds. We saw a few small fires break out as piles of debris started to reach ankle level.

Around 1:00am we headed towards home on foot. Walking down the main street we passed a restaurant that must have had a very handsome year because they had a pile of debris that reached up to the doorway. The staff were pulling out huge boxes and stringing them together. For half an hour we watched with half a hundred others as they lit box after box of fireworks. These boxes cost around one hundred USD each and contain about 30-45 individual pipes and fireworks that, in the USA, would be large enough for a city-wide display. They went through about 20 boxes while we were there, and then they draped strings of smaller fireworks over ropes strung between trees and lit them simultaneously, creating so many flashes it felt like we were inside a video game.

This year I was prepared. In 2008 I had only my point and shoot. This time I didn’t bother with the camera at all but brought out the big guns- the video camera. I walked around and, by 2:00am, I had almost 45 minutes of fireworks shows on tape, including fireworks bouncing off cars, hitting apartment complexes and ricocheting off extremely old and valuable cultural structures.The video here is not mine, which I haven’t uploaded yet, but are a prime example of what we experienced.

The fireworks and shows will go from the 2nd of February at midnight until the middle of February, and as I type this, the explosions have not diminished by much.

One thought on “Chinese New Year in Beijing”