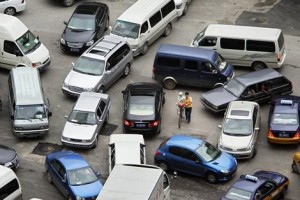 Today, I was walking down Nanluoguxiang when a women in a new model Audi decided to take a short cut out of one of the many side alleyways and turned south on Nanluoguxiang, which is a one-way road going north. She pushed her fist against the horn and honked without letting up as she forced her way through the thick, Saturday traffic of pedestrians. A group of youths of about 10-14 years old were blocking her path unintentionally. She didn’t slow down at all, but pushed the corner nose of her car into the group. They were trapped between the walls, a massive tree, several bicycles and her car with nowhere to go to get out of her way. Meanwhile, she kept honking. I managed to duck out of the way of the Audi and the smug woman inside it, thought the car grazed my hip. A boy in the pack of youths was not as lucky.

She pushed the boys like I’ve seen Mongolian herders do with their motorcycles to goats. She pushed them against the wall, some nearly falling over, with her car. One boy didn’t manage to get out of the way entirely and his foot was caught under her front right tire. He yelped, but since he was a young boy with his friends, he tried to hide his pain. I slapped the back of the Audi and yelled at the woman, who couldn’t hear me over the sound of her constant honking. An oncoming car started honking in repetition, drowning out the boy, my slapping her trunk, and the potato salesman around the corner who was being forced to pack up his stall and relocate it so she could squeeze her car the wrong way past oncoming traffic. 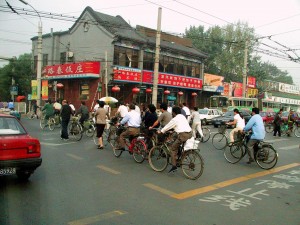 After a moment, she seemed to be aware that the boy’s foot was trapped. She starred at him and rolled the car slowly forward. When the boy doubled over and touched his foot she sped up, the back of the car nearly clocking the book in the head for good measure. He winced and tried to hide his pain from his buddies. He straightened up and limped away with them, not even yelling at the woman or jotting down her license plate. The boys pushed against the wall simply fanned back out and continued strolling down the street, the boy trying to keep up beside them.

Now, I was standing as close to all of this as a person could be without being one of the main players in the drama. I was shocked that the woman, about 50 with too much hair spray and a pimple-scarred complexion, hit the boys, ran over one’s foot and then drove off. She never once let off the horn. Now, is this a cultural difference that I simply don’t understand or is this woman a modern-day monster? I’m inclined to think that she ought to have been forced to take the boy to the hospital for an X-ray, or else to have apologized or received a fine for driving down a one-way the wrong direction. Instead, she probably felt happy to have made it home sooner using her nifty, illegal short cut. I’m inclined to think that I should have opened the driver’s door and pulled the women into the street to apologize to the poor boy, though that is also rude… 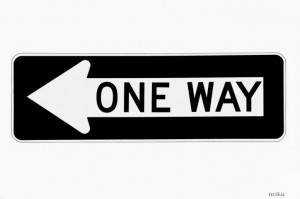 Sometimes I see stuff like this in China and I’m confused about how to react. Its true that I don’t and probably never will understand the culture and people entirely, and that holding a different people to my own moral and ethical standards isn’t exactly logical, but then I think there has to be a line where most human beings on the planet would agree that something was either good or bad. Running over a boy’s foot and hitting a whole group of them intentionally to save a few moments time seems to fall on the bad side.

All of this would bother me much less if someone else on the street had reacted at all. The potato salesman saw it all and did nothing but move his cart obediently away from the car’s honking. The other driver saw the whole thing, the pack of youths obviously saw it, and there was a middle-aged Chinese man in a business suit standing next to me with an amused look on his face watching me hit the trunk of the car. Had any one of them done anything I might have thought wow, this is horrible but at least the woman is an isolated case but since, yet again, no one reacted or came to the boy’s aid, I’m left thinking this was a small incident where everyone silently agreed that it wasn’t a big deal.

A few years ago in Shanghai I saw two women in a fist fight on the street over the price of one woman’s oranges and her not giving the appropriate change (so the other claimed) to the buyer. A group of over 50 quickly crowded around and watched them fight, not one person intervening.

Less than a month ago in Beijing I saw a woman on a scooter hit a woman on a bike. The woman on the bike hit the pavement and didn’t move. She was face down and we thought the worst. More importantly, a bus was coming and she was right in its path. We were down and across the street and couldn’t have reached her in time to stop the bus. A group of about seven people stopped to watch the disaster unfold, one of them was a police officer on his motorcycle. In the end, the bus saw her and swerved out of the way, the cop told the woman to get up and a passer by explained to us that in China, people act more injured then they are to try to get big money out of the people who injure them. In the end, she probably got nothing. 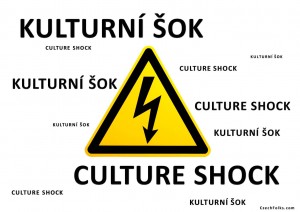 I once heard a rumor in China that if you were hit by a car you needed to roll out of the way because the driver is liable for medical costs but if you die, he isn’t liable at all. You often hear people talking about drivers hitting someone and then backing up to finish them off. And while these were all rumors, recently there was a media frenzy when a man in an expensive car backed over a small child (story here). He got out, saw the child, backed over him again (for a grand total of four full times hitting the child) and killed him and then drove off. The whole thing was caught on camera.

What does all this have in common?– basically I don’t understand the culture of hit-and-run, or hit-backup-hit again-and-run, and witnessing all of these examples personally makes me realize that it must happen non-stop around the city. So, is this a cultural difference I don’t understand or is this just rude and totally uncalled for?