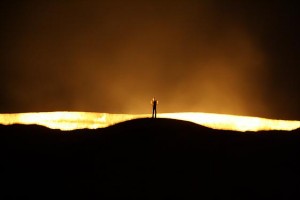 Owing to a misplaced video of our last trip to the Darvaza crater, as well as an urge to try out new grilling methods and camping equipment, we bumped along the three and a half hour ride from Ashgabat to Darvaza last weekend. To set the stage, I pulled a muscle on the right side of my neck that morning, and was rendered useless. The idea of a multiple-hour, jarring ride through the outback seemed daunting, but the end goal of camping out again at the burning crater of the middle of the desert was reward enough to pack ice into a plastic bag and hold it against my neck the entire ride.

We arrived at 6pm, and not a moment too soon because a band of German travelers rolled into camp moments after our arrival, and were disappointed (to say the least) at encountering Americans in their territory. They huffed off into another section of the desert and set up camp out of sight. We set up camp in prime location overlooking the flaming crater just as a sudden desert downpour started. An hour later, a merry band of South Africans arrived and set up camp alongside our arrangement, and proceeded to cook their dinner. These four travelers (two couples) had traveled from the UK, and were heading home to South Africa via the Balkans and the Stans. They drove their own SUV, loaded with extra fuel cans and supplies, and were well equipped for camping.They were good fun to be around, and were as friendly a group as anyone could every ask for. Having come from the direction we’re heading, they gladly shared some travelers tips and hostel hints about Turkey and Georgia, where we will be in a few weeks. In turn, we traded information for hostels in Uzbekistan, which is where they were next setting their sights.

All tourists unaccompanied by a relative, must be in the company of a Turkmen guide, theirs was a friendly Ashgabat native named Max, who puffed away at his unfiltered cigarettes like a John Wayne character. That night, with all of the travelers safely inside their tents, he told us of a deadly black spider that stalks the desert floors at night. He finished his story and then rolled out a mat by the fire and fell asleep. 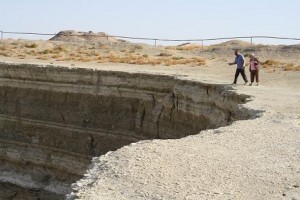 We awoke at 5:30 to watch the sun rise over the crater before cooking a hearty breakfast of steak and potatoes, coffee and an abundance of bread. The night before we had watched the crater get every more fierce-looking as the sky got darker, and we consumed a respectable amount of local beer in the process with our new African friends.We slept soundly, despite the constant rumble of trucks which were skirting the crater to lay a pipeline in through the desert, and in the morning, amid handshakes and waves, set off to visit a giant crater of boiling mud, which we had skipped last time. The crater was even larger than that of flames or water, and the mud boiled ferociously as we tossed rocks deep into the crater.

After much rock clinging amusement, we headed back for Ashgabat to visit the next best thing to the gates of hell: the Irish pub.