a true and epic tale of three men who decide to run across the Sahara desert, from West to East. Narrated and executively produced by Matt Damon, this adventure tale is worth of the ‘Abandon the Cube’ seal of approval. These three gentlemen ran for 111 days, covering the width of a continent on their feet. Their support crew and film crew in tow, these folks proved that with determination and drive anything is possible.

My favorite thing about the film was the cultural aspect. One of the three runners was from Taiwan and spoke Chinese. His English was great, but he preferred to do his interviews in Chinese, which added real dimension to the breadth of such a challenge for this Taiwanese runner as well as his two western comrades. Often, the westerners would be upset about something and the Taiwanese man would calmly take an entirely different approach. The film crew kept the lights on while they were running, at rest, eating or sleeping and the result was a really honest portrayal of what three men can turn into during such a self-enforced ordeal. Fights broke out, stupid arguments mostly, that made everyone involved look juvenile and weak. But considering the stress they were all under with the daunting task of running the world’s largest desert, it was understandable and all the runners and support crew tried to be as careful of the other’s emotions as possible. It was almost like watching a Discovery Channel special on a pack of all male lions trying to work together to achieve a certain outcome. As unlikely as a pack of male lions cooperating, this group of men proved the human species was a bit superior (but only by a little bit, at times). 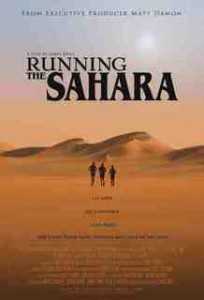 When they entered Libya, they had to have special permission not only to enter the country, but to travel freely throughout. Rather than reject their visa requests a Libyan man agreed to run with them through his country, and provided a security detail to follow the supply and support jeeps. For a pointless journey like running across a desert, these three runners managed to inspire several unlikely characters along the way, including the turban-clad security officer, the government official who runs across his own country in support of their mission and in seek of adventure. For some reason, that man’s simple gesture was warming.

I highly recommend this film, it will make you feel like you are not doing enough with your life, nor taking enough risks. Abandon the cube and do something amazing, like these folks have by jogging across the Sahara. Why you might ask? Well, more importantly, why not? Two cube-abandoned thumbs up at Running the Sahara! 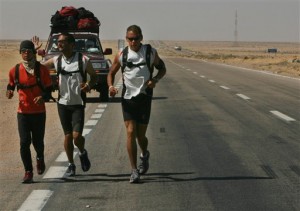