Driving Through the Mountains of Uzbekistan 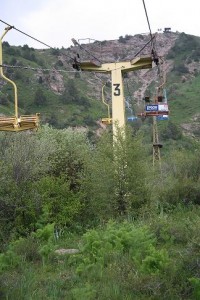 We left mid morning for the lake, in Tashkent province, about an hour and a half north-east of the capital. The drive was peaceful and from the SUV we watched women sell their morning’s fruit harvest as old men and boys continued harvesting behind them in the fields. We passed through several small towns with large cathedrals, mosques and an abundance of butcher shops (comically called a ‘go-shit’ in Russian).

The protected area includes a lake at the center surrounded by rolling green hills with mountains in the distance. The lake was created when the river, which originates in Kyrgyzstan, was dammed. Thousands of people live in the area selling their harvests or living off the small tourism industry.

On the winding roads through the park we were occasionally surprised as children (average age of about eight) would jump out of the tall grass surrounding the road to wave purple and yellow bouquets of wild flowers at the car. At several large bends in the road women had congregated to sell their goods, and it was at once such bend that we found a young businesswomen selling burnt-sugar peanuts. These were easily the best snack I’ve ever had and she was the best bargainer I’ve ever encountered.

We stopped the car often to jump out and admire the view, which changed so drastically with ever turn in the road that it was almost like a new drive began every few minutes. Finally, after my eyes were so overloaded with beauty and newness that they felt strained, we pulled off the road to an old Soviet-era chairlift that went up the side of a large hill and into the snowy mountains. It was ill maintained but functional, and as we watched for several minutes not one car detached itself and fell to the jagged rocks below.

We went through the cattle wire to the ticket booth and bought a ticket each for about 2USD round trip. The chair lift was set up as a two-seater deal where it was obvious that each seat on the contraption had been replaced or reattached at some point or another. My chair set, for example, had one blue chair with no arm rest and one yellow one with rust discoloration. Under the chair, before one did a quick prayer and sat in the lift, there was painted two sets of footprints, the one on the inside larger than that of the outside. I sat on the outside, as I’m smaller, and when I sat down the chair swung in towards oncoming traffic- aka, those who had made it up and were now death-gripping their chairs on the way down. As the chair lifted off (not so gracefully, I might add) the chair attendant gave a surprised but jolly wave and cheer. The lift took around ten minutes from bottom to top, and as I am writing this I obviously lived through the adventure. At the top a large burley man who smelled of beer and lamb pulled me from the chair so forcefully my feet didn’t touch the ground until he let go well out of striking range of the pendulum-like chair. The attendant and his friend/co-worker/man drinking in the corner laughed at each other when they saw our petrified smiles.

The summit was beautiful and well worth the harrowing ride. Within seconds of summiting it began to snow and I donned my fleece and scarf. Previous pilgrims who had survived the Soviet chair lift had ripped pieces of fabric from their shirts and, with a prayer of thanks, tied the fabric to the fence at the summit. I felt compelled to do likewise but decided not to tempt fate- I’d tie on a thank-you at the base once I’d made it safely back down. Mama didn’t raise no fool!

After a tour of the summit we descended (much less terrifying) and drove down the hill a ways. From the summit we had seen a plane which, from our vantage point, looked to have crashed nearby. We drove down a bumpy dirt road to find the plane, which turned out to be an Aeroflot (I’ve always felt they were an unsafe fleet) plane surrounded by weeds and trees but guarded by a house and warehouse nearby. I still have no idea what the plane was there for, or, more puzzlingly, how it arrived in that position. It sure did not land there, and it could not have driven down the bumpy road.

We then drove to the lake where we walked down and stuck a toe or finger each into the icy water. We discovered a floating rock, which I stabbed with my knife to discover was actually a floating piece of filthy bread. We drove around the lake and stopped again at a high point before the dam, overlooking the entire lake and beyond. We climbed up into the rocks and gazed out at the truly beautiful green hills, jagged mountains and herds of goats, cheep, donkey and cows.

Driving now above the dam we stopped at a small café called the Golden Deer in Russian. We parked and sat in a local-style booth. No sooner had we sat down than every man, woman and child in the restaurant and outdoor café ran into the street to watch two young men drag race their cars up and down the strip of curved road where everyone had parked their cars. The boys peeled out, gained speed then slammed on the brake and e-braked as they threw the wheel into a firm 180. The crowd cheered them on while we sat in our outdoor booth wondering if they would smash into our car. This went on for half an hour. Meanwhile, we had ordered two Big Macs, which were on the menu in Cyrillic. How they heard of a Big Mac out there is beyond me. It was a double-decker hamburger with mayo. Copyright laws need not apply. This was also the site of several scenes which caused me to utter sentences that should not be said aloud, including, “That man is combing his stomach hair” and “Now he is playing with his mullet.”

Back in the car we drove around the dam (surrounded by guards) before heading back to the capital. It had been an adventurous, harrowing, peaceful and puzzling trip into the Tashkent countryside.