Exploring Xian Amidst the Dangers of Dysentery

I wandered around the platform looking for Mike. Finally I saw a bathroom area in the far corner of the park where the dancing was going on. I walked over and waited a few minutes. After some time a strange and yellow Mike appeared from the bathroom clutching his stomach. I had a flashback to the Canadian on the bus and his coughing attack over the book Mike had been carrying.

We had also eaten lunch earlier at a local place where Mike had devoured spicy meatballs in oil at an alarming rate. Meanwhile, I had eaten noodles and beer. We figured it must have been the meat, as I was feeling healthy and energetic. He held his stomach, sat under a tree, and generally began to look Canadian himself. We jumped on the next bus back to the city and grabbed a hostel bunk room. I watched a film in the hostel lounge and emailed my parents to let them know we had made it safely to China and were enjoying Xi’an. Meanwhile, Mike hung out in the bathroom with a sour look on his face.

The next morning he was feeling himself again, and we decided to take the day slowly. We wandered down to the bell tower and then walked up into the Muslim quarter where I bought a compass in the shape of a turtle for my dad’s upcoming birthday. Mike bought a copy of the Little Red Book, which was a collection of quotes from former chairman Mao Zedong. The book was in Chinese and we soon discovered we could not read enough of it to be interesting. We walked around the Muslim quarter in a giddy mood, making up sayings we thought should belong in a quote book about communism’s many virtues. All of ours were cynical. 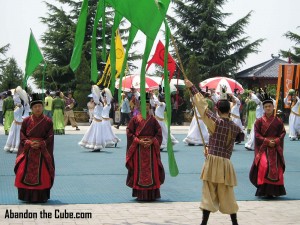 Dance for the Emperor

We decided, after the long relaxing day of joking around, walking and playing cards, to hop on another train and head for Chengdu. Chengdu is the capital of Sichuan, which is the most populated province in China. They say that one in five people in the world is Chinese, and one in four of those from Sichuan. We had plans to see the massive Tibetan national park and also the Giant Panda Research Breeding Center. We had a hostel recommended to us from some folks in Xi’an, and we had heard great things about the capital city. We were eager to get back on the road, and at dusk we boarded the urine-infested train with smiles from ear to ear.

Exploring Xian
Previous PostTop 5 things You Would Miss the Most About America Next PostTerracotta warriors in Xian: A Reassembled Army