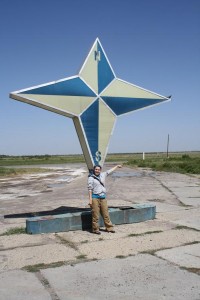 Before leaving Tashkent I spent several hours pouring over countless maps of Kazakhstan and Russia, trying to work out the best route to Mongolia. Since we rested a week in Tashkent, we had the added benefit of being able to read other team’s reports online, and the reports on road conditions in Kazakhstan were not favorable. One report in particular, from a team called Yak to the Future, told us that the roads straight North-East from Uzbekistan were so bad that it was actually easier and better for the car to just drive off-road. With some 1,500k to cover in Kazakhstan, our little Saxo would not be able to handle the abuse. Already, the car’s frame was cracking, the back tires rubbed noisily on the wheel wells, and the gear linkage popped out freely over big bumps. Our car simply carried too much weight over imperfect roads. We couldn’t take that risk. So, I continued to look at maps.

Eventually an alternative plan emerged. I decided to take our team some 700k out of the way on good roads, which would save the car and only cost us the additional gas money. Since fuel in Kazakhstan is relatively cheap, it was a good trade off. We would avoid Almaty and head towards Astana, cutting east before the city and bearing south-east and then north to Russia. It was a hell of a long way out of the way, but after hours of online research about the road conditions, I discovered that in 2007 the road I had chosen was refinished, making it a much, much smarter bet than the ancient panel-style cement roads that cut straight towards Russia.

We set off on our new route on the morning of the 23rd, with plans to make the Mongolian border in less than 5 days, with over 2,000k to travel across rough terrain with three border crossings. We were feeling optimistic. The road we chose turned out to be a good decision. We were essentially on highway for three days, with only intermittent dinosaur-sized pot holes. The worn ridges from semis on the roads remained, so that you were driving on the crest of two cement waves for the duration of Kazakhstan. 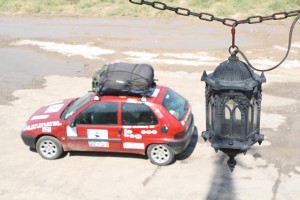 We easily crossed into Russia after a few days of non-stop driving, camping at night, and eating limited camp food at night. It was more work than play to cover that kind of distance. The Russian border, though we had heard it would be difficult and the guards had already acquired a reputation for demanding bribes, turned out to be a breeze for us. The only snag was that with his beard, the guards did not think Mike was the same boy from his passport pictures. After several minutes of laughing with them and threatening to shave on the spot, they let us pass. We looked at the map and made a snap decision. It was still early and we had made it through the border, we stopped in the first town to eat and take a short break, refill on groceries and water, and hit the road. We ran into another team that was aiming for the Mongolian border some 1000k away by nightfall.

The Mongolian border closes on weekends. We suddenly realized it was Thursday. If we drove until we arrived at the border we might, just might, make it through before closing time on Friday. We revved up the 1.1 liter engine and drove through the night, arriving at the Russian border at 4am. A team from Belfast was in front of us in line, we slept in the car for a few hours and at ten am we again greeted Russian border guards, but this would be the last time we’d see Russians in a long while, so we endeavored to enjoy the experience.

3 thoughts on “Eastern or Western Route North from Tashkent to Russia?”