The next morning we awoke early and asked Billig about borrowing a few horses. He pulled out his cell phone and made a few calls as he paced the yard, the dogs close behind. ‘Wife’ was gone when we awoke, but she appeared after a call from her husband, from across the field, carrying a bucket of sloshing milk, again dressed in high heels and a skirt, and a low-cut shirt. She made the milk into yogurt and made Mike and I a nice breakfast of noodles, meat and bits of carrot. It was strikingly similar to the previous nights dinner. She pulled out two reeds of wild onion and showed us how to nibble on the end of it between bites for added flavor. 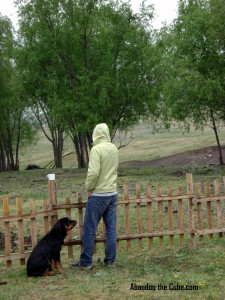 Billig said it would be a few hours before horses would arrive, as he needed to secure his horses from a friend who was using them for work that day. We decided to climb the nearby hills while we waited, and set off towards the tallest hill. Walking vertically among pine trees we marveled at the amount of skeletons we crossed, some horse but mostly cattle. Had they perhaps slipped on the slopes and broken a leg? Was the meat devoured by Mongolia’s infamous wolf packs? We side-stepped piles of dung and bones to reach the peak of a rather massive hill overlooking the valley. Small yurt camps were visible in the distance as well as Billig’s three-yurt camp at the base of the hill. Smoke was already pouring out of the tops of several yurts in the distance and it was a truly calming and beautiful sight.

We descended when we saw Billig return to the yurt with several horses in tow. Once back at the camp, Billig showed us how to get on a horse form the left side only, and to pull back to stop. He said the word ‘chir’ meant ‘go’ and that we should cry that word authoritatively and kick with our heels to make the beast run. I did as instructed and my Mongolian mustang took off at a gallop, nearly leaving my pelvis in ruin. Mike’s horse was not far behind. Billig slapped his hand against his forehead, shook his head, and went into his yurt with his dogs. I’m sure we looked ridiculous, having only ridden a horse on a few occasions in the past.

We walked our horses down a green fertile valley. It was, perhaps, too fertile, and the river overtook the valley leaving no room to ride. We backtracked up the hill and went the other way, past the yurt camp. Up a soft, rolling set of hills we saw a herd of goats, and decided to round them up, cowboy style. We yelped and rushed, but the goats were not frightened, and after a bit we gave up the silly task and decided to scale the hill on horseback. From atop the hill we could see an entire new section of the national park. It was all forests and lakes, with the aforementioned river parting the valley. Birch trees spotted the green with dots of white, and a clear blue sky was spotted with hawks.

After resting atop the hill for some time, we headed back down. Now, at this point its fair to mention that I have been thrown off of every horse I have ever been on, and have always felt that horses were evil. My sister, an avid equestrian, mocks me as not dedicated to the horse’s needs, however, I think they are just unamused at being harnessed and forced to carry other mammals. As we descended the hill I was thinking that my sister would love this horse-filled adventure. Just was I was thinking about this, my horse lurched forward and I was tossed haphazardly off the horse, head-first, saddle and all.

Mike laughed and rushed over to help me up. We looked at the saddle. Unsure about how to reattach it to the beast’s belly. I remembered seeing my sister lift a flap and pull a strap, so with this motto in mind, i tried to refit the contraption. It was lose, but doable. A reign had split in the fall, so I tied off some rope and made a makeshift device to steer the brute back towards camp. When we hit level ground I switched horses with Mike and took his rather large, yellow-hided horse at a full gallop across the fields, screaming ‘chir’ as I gently tapped his belly with my heels. It was exhilarating. Mike caught up on the makeshift horse and we trotted home. Bum-bruised and happy. 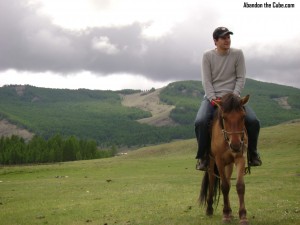 Mike on a horse

Dinner was ready when we arrived and we cleaned up the horses and sat down at the kiddi table. The meat was a rather strange, chewy tasteless thing that was mixed (not surprisingly) with bits of carrot and noodles. After a long day of activity we were famished and devoured the meal. After we were finished Mike noticed that Wife’s plate was devoid of noodle and carrot, but all the meat pieces were pushed to the side and uneaten. He then noticed that the freezer that the meat was stored in was unplugged. Wife said it was always unplugged during the day, so as to save on electricity. Our jaws dropped open. Mike’s stomach began to turn and I gulped down my tea hoping it would counteract the bad meat.

Standing outside in the yard playing with the dogs after the meal, I asked Wife if Mongolians ate dog. She said, “of course!” and motioned towards the freezer. “Last year mother of Kazak die. Very strange. Good dog. Good mother. Die sudden. Much eating.” My jaw dropped for the second time that evening. We had just eaten Kazak’s mother, who had died of mysterious causes suddenly and been resting in her final tomb- an unplugged freezer– since early that year. Mike ran to the outhouse and returned with a grimace a half hour later. “Well, at least we can say we tried dog.”

Backpacking in Mongolia Horse Travel
Previous PostMongolia: Where The Wild (Mustangs) Are Next PostLiving in a Mongolian Yurt