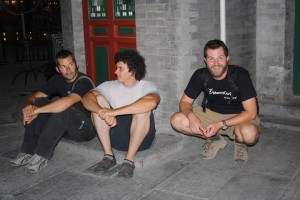 Arriving as we did in the middle of the night we had an epic sense of adventure attached to our return to China. Adding to that feeling was the fact that several ralliers were to be in the city for the next week. We got in touch with them, though they were eager to see the sights (Great Wall of China, Forbidden City and the obvious tourist stuff). We met up and went shopping with Justin, from Seattle, and two American boys from Oklahoma named Cody and Andrew. Chris, the Irishman that was a member of our Mongolian convoy, was also in town. We met and shopped, ate and generally explored New Beijing. We moved into the same hostel so we could occupy our evenings in the hostel dining hall playing jenga and smoking apple-flwvored hookahs.

Much has changed in China’s capital city since we last lived here in 2006. The Olympics, which we visited in 2008, were a huge factor. But general improvements around the city have made Beijing the figurative and literal capital. We lived in Haidian, a north-western fringe area where the universities are. We taught English at a private company there and lived in a tiny apartment that cost less than 2000RMB a month for the company to maintain. In winter, there was no heat and no air in summer. We had a pet rabbit. This time we were staying in the eastern-central area of Beijing, right in the center of the expat community. We were looking for an apartment in this area, where prices have risen around 2000 per apartment since 2006. Food, living costs, entertainment costs all went up, but an exploration of the Beijing expat job market revealed that salaries haven’t really done likewise. 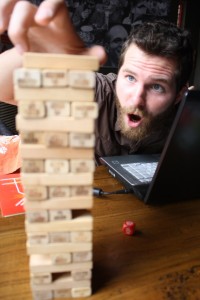 More importantly, the changes were positive, obvious and refreshing. The streets are much cleaner and there is even a street-sweeping machine that goes down the main roads daily. The trash is picked up daily, and efficiently. Shopping centers are more organized, isles are wider and the people pushing carts down them are polite and smiling. The general dislike of foreigners seems to have abated. Likewise, most foreigners we saw in the first few days in Beijing were fluent in Chinese. In 2006 a fluent foreigner was an extremely rare thing. Now, 4 years later, an incompetent foreigner with a Beijing zip code is more rare.

We spent the week hitting Beijing’s highlights, souvenir shopping with the ralliers, and enjoying our relaxing post-rally down time. Having been in a cramped, tiny, dusty car for the past month, it was a relaxing change of pace.

Come back soon to read about apartment and job hunting in Beijing, as well as the trials and tribulations of dealing with a corrupt realtor.