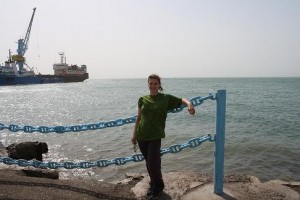 When we tell people that we live on the road, their eyes light up and they inevitably mutter, glazed-eyed: “man, I wish I could do that.” Usually we respond with an energetic pat on the shoulder and a hearty, “you can!” Naturally everyone has the reins to their own destiny, and can make of it what they want. For those of you thinking about the glamor and unending fun of a life on the road, here is a saga to solidify your wanderlust.

Two weeks ago we drove from Ashgabat to Turkmenbashi on the Caspian Sea coast. This 350 mile ride was exhilarating to me after a few dramamine pills, but exhausting and harrowing before they kicked in. Thanks, dramamine! The road, as I’ve mentioned before, was ill paved and lacking in forethought. One companion in the car called it “spine adjusting” while another prefered “joint altering.” Travel does wear and tear on one’s body. Did I mention it involved two nights of sleeping on the floor bookmarked by day long driving? Our immune systems were understandably down.

At any rate, the Caspian was well worth the adventure to get there by land. We (meaning Mike) swam with the sea snakes, we  (meaning Lauren) frolicked along the sandy beaches and we drank to the sunset and good company (all of us). But, a day later, back in Ashgabat, we were lying on the couch with our heads in an array of buckets, tubs and bags, wondering between vomits what we had done to make ourselves so ill.

Three days later we were still sick. Dysentery looks fun compared to what we were feeling. Dementia set in the third day for me, and I lay in bed,  squirming and holding my stomach wondering why Minnie Mouse was perched on the chandelier. And on the fourth day the doctor arrived with a magical array of pills and capsules and such modern devices as ear thermometers. The capsules turned out to be cypro, something I recently discovered I’m highly allergic to. So, coupled with the illness we had come to call the ‘Caspian Sea Virus,’ I also had an allergic reaction that caused my lips to swell. From the side I looked like Angelina Jolie having a really miserable day. The jokes were unending, but at least it was something to joke about! Sadly, there is no photographic evidence as I threatened to stomp on every camera that was pointed my way. 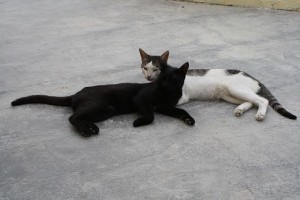 So, with collagen-infused lips (aka, allergic reaction lips), a virus that causes extreme migraines and stomach pain, nausea and dementia, we set off for a 4th of July party that was, ironically, Hollywood themed. I fit right in.

9 days later the majority of us were feeling better, though still tired. Even mid-hurl I was thinking to myself, “I’d rather be here with my head in this bucket than anywhere else on earth.” Travel provides an unending series of chances to test one’s self, and to discover one’s self while discovering the world. I discovered (this is a very Carry Bradshaw ending, I know) that I’m happy to have a misaligned spine and vomit in my hair, so long as it means I can have these things in tandem with an adventure such as the one we’ve set our course for. Sometimes things in life are as simple as black and white.