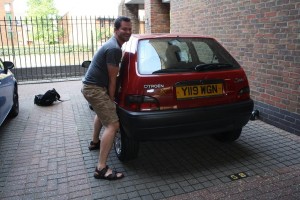 With only days until the launch of the 2010 Mongol Rally, Bill, Mike and I are busy outfitting the car, working on last minute paperwork, begging for expedited visas and enjoying a bit of what London has to offer.

For the most part, things are coming together smoothly. We dropped off our applications at the Uzbekistan consulate in London last Friday. There was quite a long line, and there are (we were told) no guarantees that your visa will be returned in 5 working days. Nevertheless, we leave on Saturday the 24th and have no word from the consulate yet. No pressure! We also managed to apply for our Kazakhstan visas in a very last-minute manner. They were extremely helpful and quick and assured us we could pick them up well before the launch of the rally, which we managed to do after only a three day wait.

In terms of acquiring last minute items, as I type Mike and Bill are out scouring the city for a roof rack for our tiny red beast, as well as gas cans, spare tires, a tire jack and a few items like new wind shield wipers and a tool kit. We went and looked at the car for the first time last evening. It is much bigger than I originally thought it would be. In fact, there is even room for a fourth person should we meet someone who already has a barrage of visas and a pocket full of cash (unlikely). We’re extremely pleased with the car and the condition it is in. If it makes it to Mongolia, we’ll be even more ecstatic! Bill has changed the oil and has done a once-over on the engine to secure back-up parts. We’ve managed to acquire camping equipment that borders on the extreme, meaning we’ll be one of the most outfitted teams in the rally. Yes, we have our car insurance, we have our travel insurance, we have a massive first aid kit, a roadside kit, a triangle, orange vests and a jack. We’re really ready….. I hope! 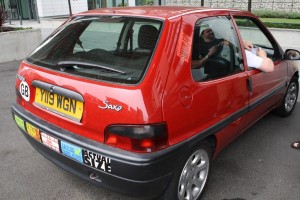 The launch itself is at Goodwood Estates, which is apparently a race track in West Sussex. Events kick off the night before on Friday at 4:00pm when the Adventurists cater in free beer and provide us with a camping spot so we can test our gear, get to know fellow ralliers and even partake in a massive soccer game. Sounds fun! The following morning at 11:00am cars that are registered begin to take off for Mongolia with a pre-victory lap around the race track before gunning it to a full 30 mph before heading to the tunnel or ferry. We’re hopping on a ferry and have plans to make it all the way to Paris by the end of Saturday night. Fingers crossed on that, since it is a bit of a drive.

When next we write we should be in Paris, and I’ll hopefully have quite the story to tell about the launch, the ferry, France and its most cherished city Paris.