I found another dresser with a decent frame on Craigslist. Yes, I check out the listings every few days for cheap, sturdy furniture that I can refinish and hopefully sell. Here is the original photo posted to Craigslist. 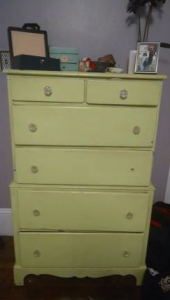 I really like the tiered look, the two sections and the cute cut-out by the legs. Not a bad shape and I think the clean lines will make this a nice canvas for something a bit more wacky and fun than I normally do. I want to treat this basically like a canvas of wood that happens to have drawers instead of a dresser to paint on. It is going to need some new hardware, and it looks like the second-to-last drawer has a chunk missing that I’ll have to replace, but all in all not bad for $30 bucks! I pick it up tomorrow so we’ll see if it was a good buy.

The lady I bought it from was moving to NYC and had to part with her dresser. It was smaller than I thought, but better construction than anticipated. I took it home with the help of a rented Zippy Shell and primed the base. It looks a bit French with the white primer and the base cut. I think I’ll play that up a bit and go with a vintage French-inspired look that pays homage to their national drink: wine. 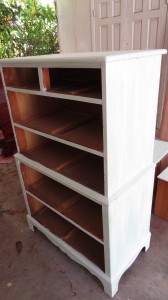 Next, I plan on trying something entirely new. I plan on trying to stencil in more design using a Martha Stewart stencil and some joint compound. Sounds risky! But if this doesn’t work I can easily sand the ol’ girl down and try again. I think a bit of flare will add to the elaborate cut along the base and give it a more overall French feel. I hope my French buddies out there aren’t rolling their eyes. Sorry if this is the equivalent to painting cowboy hats and hamburgers all over a dresser in France and calling it American.

Believe it or not I found some awesome Oops! paint at Home Depot (I love that they do that!) and it was about the exact color I was looking for anyways (ivory). Bought a liter for under $2 instead of the anticipated $14. Sweet. Then I scrapped the whole idea with the joint compound and texture and instead painted the French label right on the ivory paint. It didn’t look quite finished…. so I did the top and tiers in black to pull in some contrast. I can’t speak French, but I think this is some kind of a vintage perfume label. I just loved the lines. 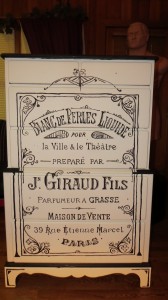 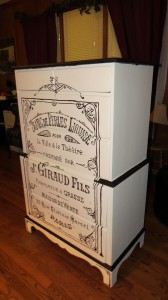 Alas, the white was too stark and I was always planning on an antique finish, so here that is below! 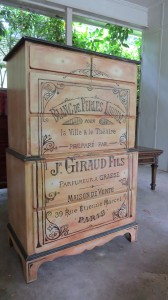 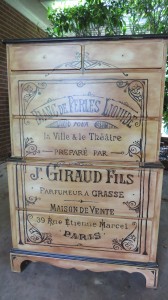 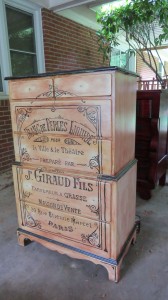 The light is catching the protective layer of poly I put over the antiquing, but it isn’t all shiny when indoors. That is just a super bright, sunny North Carolina morning. 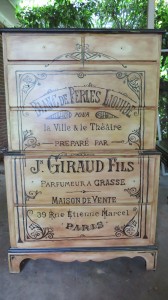 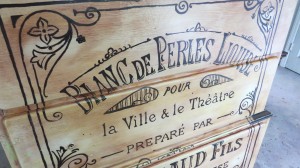 Finally, a close up of the label and antiquing. Now, to slap on some hardware and call it good!

Okay, the hardware is on. I went with an aged, antique brass look with simple knobs for the top two drawers and pulls for the remainder. I was originally hoping to have simple black knobs but it looked too Gothic, so I dated it even more with brass. Here are the final photos! 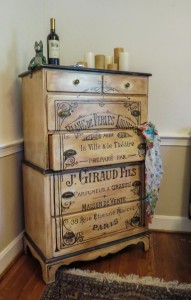 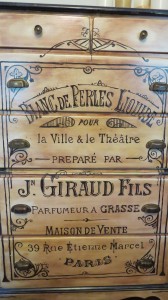 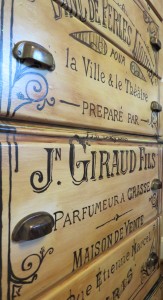 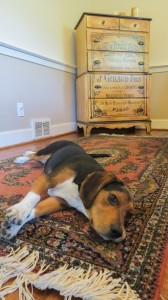 One thought on “French Dresser Upcycle”