Getting a Visa for Uzbekistan in Shanghai 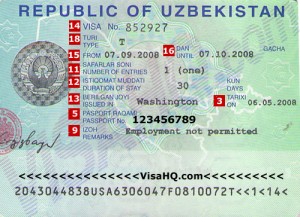 Is this what is looks like? I wouldn't know.

This is apparently what a visa to Uzbekistan looks like, but I wouldn’t know.  It has officially been 3 weeks since we began our endeavor to get an Uzbek visa.  Although we are two Americans trying to get visas into Uzbekistan in China, we have come across some abnormal difficulties.  We have been informed by several people that, of all Central Asian visas, Uzbekistan would be the most difficult to obtain.

Three weeks ago, we discovered the location of the Uzbekistan consulate in Shanghai – or so we thought.  When Lauren arrived, she discovered that it was boarded up and that the office had not been there for over two years.  So not only were all of the government websites wrong, they had not been updated for two years.  The following week, as we were preparing to go to Beijing to go the the actually embassy to get the visas, we found some new information.  After calling over 7 different phone numbers, a man with a very think Uzbekistan accent answered the phone.  I got the address from him and we jumped in a cab down to the same Chinese government building you go to get your red work permit.

We met with man in the visa office, an extension of his office attached to a windowed door with a slot to place paperwork through.  He told us it would be difficult getting visas as the relationship between the United States and Uzbekistan has diminished slightly over the last few years.  This, I assume, has been because of the United States stance against Uzbekistan’s’ human rights following the Andijan Massacre in 2005.  We were then informed that we qualified to be lucky participants in the “new and reformed” visa procedures involving Internet approval before we bring in our visa applications.  We went home immediately and then applied through the Uzbekistan Ministry of Foreign Affairs website, which gave us authorization numbers.  I called the visa official again telling him we had been approved with authorization numbers and all, but he assured me that he would be notified by the ministry and would contact us once he could issue us the visas.

Over the course of the week, I called him practically everyday until on Friday, we were told to come back in and reapply the old way.  Having wasted two weeks, on behalf of the Ministry of Foreign Affairs, we were offered a formal apology and submitted our applications and copies of our passports.  That was now also a week ago.  We will be persistent and continue to contact him tomorrow, but we have to get them next week so we can apply for transit visas through Kazakhstan.  We will be getting visas for Turkmenistan once we arrive in Tashkent.  More to come on the Central Asia visa saga and we will provide updates as they occur.  If you are interested in going to Central Asia, we strongly encourage you to start your application process at least a month and 1/2 in advance, if not 2 whole months.  We are optimistic that the other visa will be easier over the next week or so.

9 thoughts on “Getting a Visa for Uzbekistan in Shanghai”