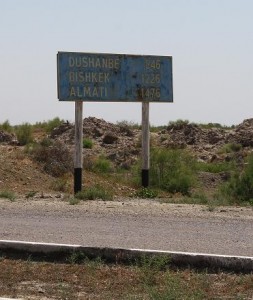 After recovering the cell phone in Bukhara, we decided it was time to move on as we had been in Uzbekistan for almost 25 days and in Bukhara for 7. We checked out of our hotel and we were not surprised when they tried to add on several different expenses that we had never agreed upon. After renegotiating what had already previously been negotiated and saying a farewell to Bukhara, we strapped on our packs and headed for the local bazaar to catch a marshutka (shared mini-bus) to Alat and then from Alat, to Farap – the border crossing into Turkmenistan.

We were immediately hassled by several taxi drivers saying they would take us all the way to Farap for 30, 40, and 50 USD. Eventually we found someone who offered 3000 SUM per person, which is what the cost should be for a shared cab. (This is equivalent to about 2 USD per person.) Multiple guide books confirmed this, as well as personal experiences earlier. To clarify we asked the driver to write it down and re-stated that this was for each person all the way to the border crossing. He nodded his head and wrote down 3000 SUM. This was a fair price for this ride as we paid the same for a ride to the bus station in Urgench from Khiva and the ride lasted the same amount of time. After about a half hour, we approached a road block with several soldiers sporting machine guns and a barbed wire blocking the way. Our driver crossed his arms together in the air making a giant “X” and said HET, pronounced “Knee-Yet”, which means no.

Immediately as we got out a huge group of people surrounded us trying to get us to take their cab for God knows what reason because it is a 1 km walk through the desert to get to the customs center from that location and cars are not allowed through. I handed the driver the 6000 SUM for the two of us and, just like I had expected – then came the scam.

Now before I go any further, I want to mentioned that I really enjoyed the sights and traveling in Uzbekistan. We have tried not to use our blog as a means of complaining or grumbling about the difficulties of travel. However, it is also necessary to give a fair account of our impressions as well. That said, Uzbekistan is one of the few places I have been in which I would recommend going with a tour group for one reason: money. Everything you do, comes down to it and it is exhausting to deal with in this country. You literally have to go through an entire menu, if they have one, and ask the price of everything before you order. Otherwise the bill will be outrageous. If you forget to ask the price of, lets say peanuts, you will have a bill that states 3 dollars for the meal and $10 peanuts. Moreover, you shake hands on a deal at a certain price and then get in the car 5 miles up the road the driver will ask for more money and then insinuate that if you don’t agree he will kick you out in the middle of nowhere. After 25 days of this bickering over every meal and ticket, I was a little burnt out and was not in the mood.

So as I handed the 6000 SUM to the driver, a puppy dog look came over his eyes, which was speaking, “Oh, no! What a terrible mistake has been made. I meant 30,000 not 3,000 sorry I left off a zero. Moreover, I mean 30,000 per person.” My patience was 100% gone. In a barrage of madness, in front of border security guards with automatic weapons, I threw down my bag and pulled out the notebook in which the driver had scribbled 3,000 SUM. He grabbed it out of my hands before the circle of other taxi drivers could see what he had written, took the pen, and added a zero to the end. After about 5 minutes of him yelling and kicking in the sand that he wanted 60,000 SUM. We grabbed our bags and headed for the border guards – who do not get involved in these sorts of squabbles. They visibly did not know what to do. Only about 18 years old, the guards looked at Lauren’s visa and passport and completely forgot to look at mine. Then we walked through the crossing.

By now, the mod of taxi drivers had dissipated but our cab driver pushed through the guards and followed us through the crossing. He started pulling at my pack to hold me back and yelling and screaming. I took out the rest of the SUM I had in my pocket, which I shouldn’t have, and offered him the remaining 12,000. At first he refused, but then he took it. Now, still grossly overpaid for the ride, he continued to follow us. He even stepped in front of me, glared, and then pushed me in the chest as hard as he could. I flew back a few feet, as I had about 80 pounds of gear strapped to my back. That was it. I turned around, stared at him. Unclipped my bag and let it drop to the ground. I walked right up to him nose to nose and treating him like an infant, pointed back to the barbed wire fence. As I stood there staring him in the face, three of the boarder guards raised their weapons and yelled at the man. He shrugged his shoulders and walked away laughing.