Goodwood Race Track and the Festival of Slow 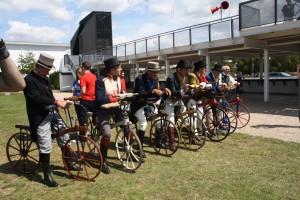 The Mongol Rally launched on July 24th from the Goodwood race track where the Festival of Speed is held annually to the great glee of the British public. To slow things down a bit, the Mongol Rally rented the race track for the 24th and lined up all of the rally cars. There was a fire truck, 55 ambulances, an ice cream truck, a Rolls Royce, and several jeeps. There were service vehicles galore as well as the standard 1.2 liter miniature car like our own little Citroen Saxo. We adored the little car and, with only one short hour of driving stick shift under our belts, we knew this adventure was going to be something special.

The launch was meant to be a party, and the Adventurists provided live music on stage and a celebrity announcer (Buddy, from Lonely Planet). Gypsy singers and dancers played as they walked around the parking lot while we clothed our car in stickers and did our final packing. A good friend from London rented a car and drove the four hours down to Goodwood to see us of, which brought us all comfort and made us feel like we had our own little cheering fan club (of one) in the stands somewhere. The rally organizers also hired three actresses to run from car to car in wedding dresses asking if anyone had an American or British visa for her (did I mention they were Russian?). The joke being that the route will have gypsies, as well as women willing to marry anyone to get out of some of the places they live.

To get the festival of slow in the mood for a snail-paced rally the Dandies were hired to race their ancient wooden bikes down the track. The Dandies were all in their 80s, and were a fun pack of gentlemen dressed in traditional attire. They managed to go faster than some of the cars. Before the official launch, one car had already broken down.

The launch was finally announced at 2pm. We piled into the car and revved the engine. With wild cheers, screams, honking and waving we set off on our pre-victory lap around the Goodwood race track. The ol’ Saxo managed to make it around some extremely tight curves. A good sign, considering the road ahead of us! Finally, we finished our lap and took off down the highway…. In the wrong direction. The Mongol Rally begins!!!