The Republic of Georgia

The Georgian claim to fame is that they were the second country, after Armenia, to have Christianity as its official religion in the 4th century. St. Nino, who converted the monarchy who in turn installed Christianity across their realm, is a venerated saint to this day.

With the expansion of the Byzantine Empire, the region fell under Persian control, until being driven out briefly by Vakhtang Gorgasali (from whence Georgia gets her name). With the Persians gone, however, the door was open for the Arabs, who invaded in 654. When the Arabs were finally expelled, Georgia became the center of Christian culture and learning under Queen Tamar, a powerful female monarchy. 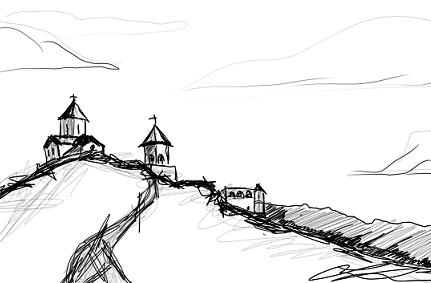 Like everything in Central Asia and the Caucus, the good times came to an end with the arrival of the Mongols in the 1220s. When the Mongols left, the region was devastated by the plague, and the Tamerlane invaded several times, wreaking havoc on the border regions. This was too much to bear, and the united region broke into smaller areas that were more defensible until the Russian invasion of 1770, which the Georgians accepted in return for protection against the Muslims.

Like everywhere in Central Asia and the Caucus, the country was briefly free before being invaded and conquered by the Red Army, and falling under Soviet rule. Stalin, who came to rule the Soviet Union, was originally from Gori, a small town outside Tbilisi. 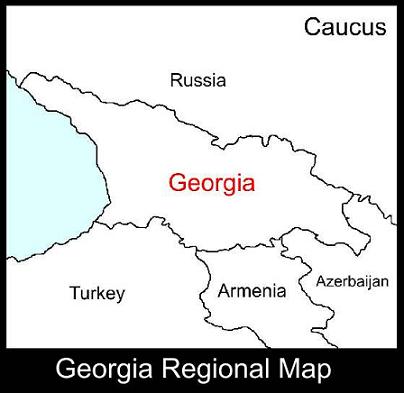 Ever a defiant people, the Georgians resisted Soviet rule, and in turn the Soviets massacred 20 hunger strikers in Tbilisi in 1989. The country declared independent in 1991 when the USSR collapsed, but fighting broke out in the streets among power seekers that did not stop until a key Soviet leader agreed to take power in the midst of the vacuum.

With ongoing problems relating to border regions (namely, South Ossetia and Abkhazia) Georgia is suffering as tourists stay away due to ongoing dangers in those areas. While Georgia is safe for travelers, going to those regions is forbidden for obvious reasons.

Transportation in Georgia is easy, even for someone without Russian or Georgian language skills. People are friendly and go out of their way to make sure you are on the right marshrutka or bus. Trains are decent quality, but perhaps leftover from Soviet times. Cabs are overpriced, but the drivers only rarely try to skim an extra “foreigner fee” out of tourists. 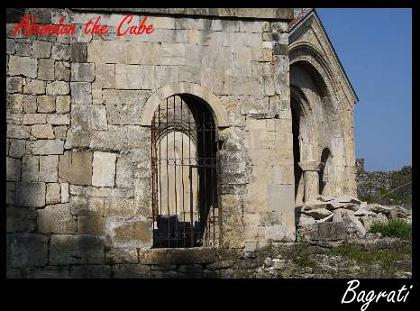 The Georgian Lari (GEL) is roughly equivalent to $1.60 USD.

Costs in Georgia are not as steep as Azerbaijan (where oil money has inflated prices) but more expensive than Armenia. The average cost for a beer is 2GEL, while a night at a hostel is a steep $20 per person in the city and 20 GEL per person outside the cities.

The essence of every meal seems to be khachapuri, a bread envelope with cheese inside. This is served, often enough with dumplings called khinkali. Basic meat and potato dishes were also available, but during our entire stay in Georgia we did not find a single vegetable dish.

Georgian wine is world renowned, and Georgians claim they invented the grape drink (a claim that may well be true). Grapes grow on every vertical surface in and outside the city and every home-stay has its own wine. Local beers are tasty, if not overly carbonated, and the best two are Kazbegi and Natakhtari.

We had trouble find restaurants outside the cities, and even in major urban areas there were more corner markets than bakeries or cafes. You can, however, find beer on tap sold by friendly old ladies along the sidewalk, or wine at every market.

While in Georgia you will find yourself talking to a plethora of people on a daily basis. From shop keepers eager to know where you are from to chatty bus drivers, who whistle their knowledge about New York and California while braving hair-pin turns on windy, mountainous roads.

The Georgians are known for their hospitality and friendliness, and you will not be disappointed on these accounts. While some travelers report causes of cheating, minor theft and swindling in the cities, we did not encounter any problems. 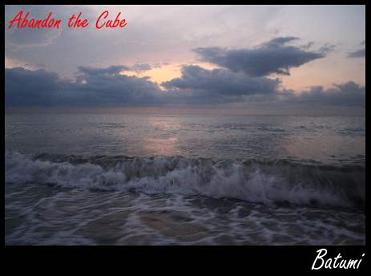 Suggestions for Traveling in Georgia:

Despite the apparent risks involved with traveling anywhere above the M1 highway that bisects the country, a visit to Kazbegi along the Georgian Military Highway is highly recommended. The hiking, horse trekking and camping is beautiful and the people in this region are extremely helpful and friendly.

With very little food available outside restaurants, and definitely not outside towns or cities, make sure you have a supply of snacks when leaving the cities. We also recommend vitamins, as there seem to be no vegetables in the country other than potatoes.

Although a bit pricy for a backpacker ($500 for two weeks) we fully recommend Georgia as one of the friendliest and beautiful places we’ve ever been. Our time spent in Tbilisi, Kazbegi and Batumi was enjoyable and relaxing, and the Georgians went out of their way to help us in every respect. We find ourselves now forever spoiled by their kindness. Were it a bit more affordable we would have stayed longer, but a backpacker can’t be picky!

“Georgia”, according to signs at the border crossing, “freely invites everyone and anyone to visit.” Visas are not required, and the borders are among the friendliest and hassle-free we’ve encountered.

Our Route in Georgia:

We traveled from Azerbaijan to Tbilisi, and then up to Kazbegi before heading west to Gori, Borjomi, Kutaisi and the Batumi before crossing into Turkey via the Sarpi border. 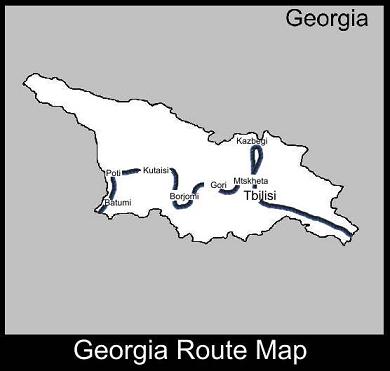