History of Bosnia and Herzegovina:

Part of the Western Roman Empire after the split, the area that is now Bosnia & Herzegovina fell under the rule of the Huns until being reclaimed by Emperor Justinian, of the Byzantine Empire before being conquered again by the Avars, a Slavic people, in the 6th century AD.  In the 9th century, the area was controlled partially by Serbia and partially by Croatia, which had lasting consequences for the people of the region. While the two ruling powers squabbled, Bosnia became independent, and was ruled in peace by its own monarch, Ban Kulin. His family and its primary rival would wage an ongoing civil war until the Ottoman’s took control of the area in the late 1400s.

After the Treaty of Berlin was signed in 1878 rule of the area fell to Austria-Hungary. This situation lasted until 1914 when a Bosnian Serb, Gavrilo Princip assassinated the Austro-Hungarian heir to the throne, thus launching WWI. 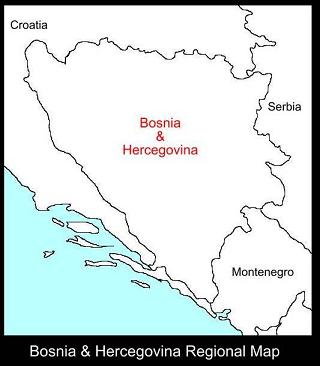 After WWI, Bosnia & Hercegovina joined Yugoslavia in 1929, which only lasted until the Germans invaded in 1941 and Yugoslavia surrendered. Bosnia was ceded to Croatia, which resulted in the Croatians expelling and slaughtering hundreds of thousands of Serbs, Jews, Communists and Roma. Tito emerged to power despite the war, and ruled until his death.

In 1991 Bosnia & Hercegovinia declared independence after tensions from ongoing negotiations with neighboring countries broke down. Serbia attacked, hoping to gain all lands where Serbs were a majority. Meanwhile, Croatian leaders had their sites on similar land gains where Croats were the majority. After intermittent phases of attacking and peace, war resumed in 1993 with what the international community called the genocide of the Bosnians. NATO bombings against the Army of Srpska began in 1995, ending in the signing of the Dayton Agreement, between Croatia, Serbia and Bosnia. 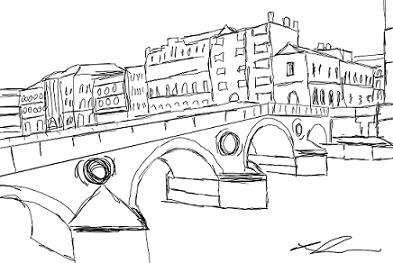 Transportation in Bosnia and Herzegovina:

Transportation to and from Sarajevo was difficult, at best. There were only a limited number of buses, and the train did not run from Belgrade to Sarajevo at all. The buses had to trek through Kosovo, which is in a perpetual state of identity crisis being claimed as Serbian by the Serbs and independent by those in Kosovo. Trains and buses leaving B&H go through security before reaching the border, and run to a limited number of destinations. Within Sarajevo transportation is easy and fluid, but even within the country there are places hard to reach with public transport. 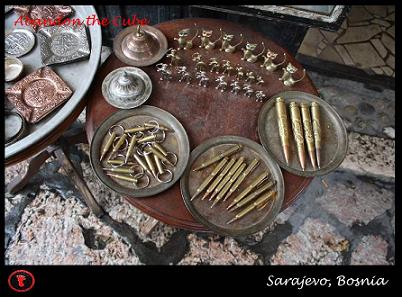 Money in Bosnia and Herzegovina:

Sarajevo is an expensive city, and one well worth the money spent.

Food in Bosnia and Herzegovina:

We were surprised by the international foods available in Sarajevo, while local cheaper options were of the Ottoman variety of donar, lamb sandwiches and fries. There were more pubs than restaurants, which was an acceptable ratio for most.

Many people in Sarajevo speak several languages, including Russian and English. But the people in general were reserved and conservative, and not prone to easy conversation. Sarajevo is set up for tourism, but the locals themselves seem a bit bored by the city’s hype. All of this results in a culture of high-pressure sales to tourists with little other interaction. We were lucky enough to stay at a hostel with great local staff who were friendly and welcoming, but other than that interaction was low. 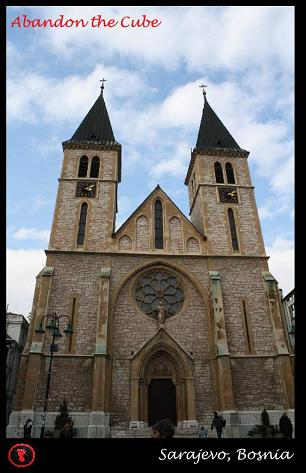 Suggestions for travel in Bosnia and Herzegovina:

Because of lingering hostilities, transportation in Bosnia & Herzegovina is tricky. International buses drop you at whatever bus station they are affiliated with, the Serbian or Muslim one. This can result in you being stranded at the Serbian stop 15k from town with no money changing offices, no means of transportation and no nearby hotels. We suggest you change money before coming into the country, as changing while there is nearly impossible. We also suggest asking in advance where your bus or train will terminus, and acquiring maps in advance. While in Sarajevo, you can bargain when shopping at the alley-way stores, we suggest you do so, as prices are inflated some 100% for tourists. Tipping is expected in Sarajevo.

We enjoyed Sarajevo, and it was our favorite capital city from Shanghai to Europe. The charm of the city is not undone by recent hostilities, and the quaintness of the capital is not ruined by the modern amenities and shopping centers creatively tucked into alleys in old town. The city has so much history to study and absorb while in town that one is never short of fully enthralled. The only down side is the difficulties in changing money, transportation to and from the capital and the higher-than-expected costs of food and clothing.

Visas for Bosnia and Herzegovina:

Citizens of UN countries, Australia and the USA do not need visas to visit. All other citizens should proceed to the embassy in their country.

We traveled from Belgrade, Serbia through Kosovo, to Sarajevo by bus. It was an icy, snow-covered one-lane road of switch-backs and drop-offs. From Sarajevo we traveled through Banja Luca to Zagreb, Croatia, by train. 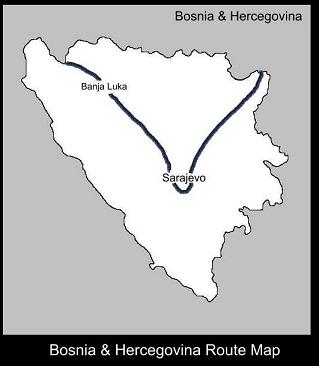