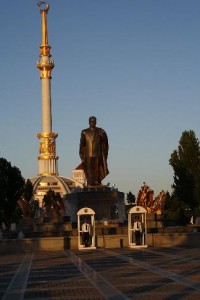 Laid out in 1993, two years after the Turkmen claimed independence from the Russians after the fall of the Soviet Union, Independence Park is a testament to the strangeness of the country. The park is 2km long and 1km wide, the center is entirely planted in non-native pine trees, a passion of the former President’s. The pines require constant watering, difficult in the harsh desert climate that is native to the area. Locals say the plan is that the trees will alter the climate, thus bringing coolness to Ashgabat. This is unlikely to occur as the trees continue to die. The entire circumference of the park you will pass a small fountain the size of a bus every twenty feet. Each waterfall has a leaping plaster dolphin in the center jumping through the fountain’s spurts of water. It is fair to say there are over 100 fountains in the park, a park which rests, I will remind you, in the middle of the desert. If you ever wondered where the Aral Sea went, this is your answer. Canals built to fuel the dolphin fountains in Ashgabat have contributed largely to the Aral Sea’s demise.

While the interior is dying a pine-tree-in-the-desert-death, the outskirts of Independence Park, are here to stay. Along the western side runs Ruhnama Park, a small homage to the former President Niyazov’s book of sayings and revision of Turkmen history. The Ruhnama, it is said, will guarantee your way into heaven should you read it three times through. The people we have met so far, have not completed that arduous task. In the center of the park sits a giant sculpture of the Ruhnama in all its pink-green glory. The book sits atop a giant fountain on a metal track. In favorable weather (of which there is none) the book can open along the track, displaying a TV screen inside. Around the giant Ruhnama sit a plethora of flag poles bearing the Turkmen flag, and an array of small pavilions and water fountains. 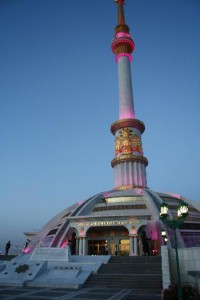 At the southern end of the park rests Independence monument, which locals fondly call ‘The Plunger.’ This giant monument doubles as a flag holder and a base for 8 smaller waterfalls. The monument reaches 118m, significant because Turkmenistan gained independence on 27 Oct, 1991. 27 +91 =118. Along all eight sides neon strobe lights have been installed pointing upward so that in the evening from nearly everywhere in the area, one can see a giant, neon, wet plunger sitting in the middle of a dying pine forest. We were bold enough to venture for a closer look, and discovered that the entire area around the plunger is guarded by large, bronze statues of famous Turkmen with weapons or books.

Across the park, on the northern side, sits a monumental achievement locals call 5 legs, for it is a five-sided structure. Naturally all five sides double as raging waterfalls. Inside the monument is a mall called Altyn Asyr, or Golden Age. You can take an elevator to the 6th floor for an amazing panoramic view of the neon park, where a beer will help put your aching mind to rest- there need not be logic in Independence park. 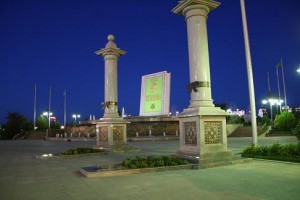 The highlight of the park, however, is along the western side past the giant Ruhnama statue and before the neon, 118m plunger. Here a pure gold statue of Niyazov himself stands with his arms outstretched, a cape billowing in the wind behind him. Two unfortunate guards stand post, without moving or blinking, 24 hours a day. This golden monument sits atop a waterfall, the waterfall is surrounded by five-headed eagles also made of gold.

2 thoughts on “Independence Park in Ashgabat”