As the trip planning progresses I find myself at the stage of applying for international visas, a process wrought with vagueness and inconsistencies. For example, you can get a transit visa for several Central Asian countries but the duration of stay is not long enough to get across the country by land. Or, visa laws will stipulate that you need A, B and C and then when you get to the consulate they will have a list that goes from A to Z of random documents and health testing you need. That aside, the trip planning is going well. We are set to go from Urumqi to Almaty by train or bus through the Tien Shan mountains, and then spend a day in Almaty seeing the world’s second largest canyon and the accompanying hot springs. From there you grab a train to Tashkent, Uzbekistan, where we’ll spend a day in the capital before heading to Samarkand and Bokarah, where I’d like to spend a few weeks, if time permitted. 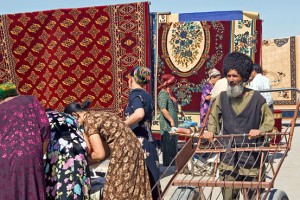 Maps of the region are hard to come by, so planning a more accurate by land traverse is difficult. Where trains become obsolete we’ll take buses. In Central Asia and China a bus is anything from an SUV with all the seats removed to a long hallow tube with stacked cots and a pin for animals in the back. Hopefully the buses in and around Bukarah are an improvement upon earlier experiences, but either way its an adventure.

Trains are apparently the best way to travel…. until you reach Bokarah, whereupon the train becomes a projectile of T.B. From Bokarah we’ll need to take buses or rent an SUV or comission a pack of horses or camels to take us to Ashgabat. With visa laws somewhat obscure for Turkmenistan, I’m having difficulty believing I can just nab permisssion to cross at the border.

I’m growing more excited about the trip. Reading up on the bazars,

minnerets, whirling-dervishes, single-eyebrowed ladies and massive lakes of fire have inspired me to salavate when looking at the map of my overland route. It is a shame humans invented airplanes because I feel little good has come of it. We use them for war and for making travel easier. Unfortunetly its made travel less interesting. This trip is really going to feel like a trek from shore to shore. From Shanghai to Ashgabat, and then west to Turkmenbashy on the Caspian Sea. Visas are being acquired and train tickets sought out. The countdown begins!

One thought on “International Visas”