Into the Wilds of Mongolia 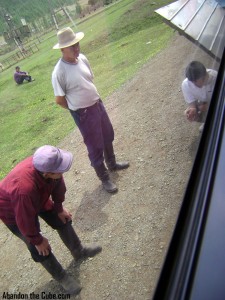 The station no longer existed but we heard a rumor that one bus a day went out to the national park. We had missed the bus for that day so a friendly lady near the bus stop walked us to her apartment, which was also a hostel, and we stayed with her that evening, watching a film in Russian and drinking vinegar vodka. She arranged for us to take the bus the next morning, and swore that a friend of her family’s would meet us at the end of the bus route and take us to her family’s yurt (ger) up in the mountains for a few days. We eagerly agreed.

We awoke early, visited Ulan Bator’s famous Buddhist temple, walked more around the depressing city, starred at the nuclear power plants and saw the Trans-Siberian tracks. After a tasty but plain meal we finally boarded the one-a-day bus to Terelj, Mongolia’s national park. We were to meet up with our contact when the bus stopped. Speaking not a word of Mongolian, we boarded the bus and sat staring out the windows as we rolled out of Ulan Bator. The bus became so crowded the the entire isle was filled with people, chickens, babies and boxes. We rode for what felt like hours until finally, after two stops in the middle of nowhere where several people had disembarked, the bus sputted, coughed and came to a complete stop amid beautiful pine trees and rolling green hills. After twenty minutes the bus driver admitted the engine was kaput, and we all grabbed our bags and began walking. Nobody knew how far until the next town, we set off at a determined march that slowly degenerated into an idle stroll, and, after a fairly decent climb, we arrived at a township in the middle of the park where we decided to grab a beer and make a new plan. Meeting up with our contact was now impossible, as the bus had broken down and we did not know where we were, let alone where the contact was.