Into Turkmenistan by Foot

The rest of the day, including two long walks through no-mans-land between customs in Uzbekistan and Turkmenistan seemed easy after dealing with the cab driver mentioned previously. Walking a few kilometers in the middle of the desert in June with backpacking gear on was tough, but actually enjoyable after dealing with the Uzbekistan cab drivers. We passed several truckers waiting for customs clearance at the boarder and approached two smiling Uzbek guards at the customs fence. They were very friendly and we completely unaware at what had just happened at the barbed wire fence just 20 minutes earlier. After some idle talk about America where we were from, enough for them to practice their English, they let us through the gate. I think that this was related directly to their liking of Lauren as I had heard horror stories about people waiting at the gate in the sun for hours before being allowed through. Luckily they really liked Lauren and opened the gates right away. We matched up our customs forms from when we entered, walked to another building, did a simple baggage check with another guard and were on our way down the pedestrian walk out of Uzbekistan.

The last Uzbek guard checked our passports and visas and opened another gate that led down a dirt road to nowhere. There was an unending line of trucks carrying shipping containers waiting to get through Uzbek customs and into Uzbekistan. This walk was even longer than the first. There were several women with young children walking down the road as well so we followed them. After about 20 minutes and a liter of water weight later, we arrived at a wooden guard tower with two Turkmen guards at the bottom. They checked out documents and on we went to Turkmen customs – which consisted of a simple concrete building with an exposed exterior hallway. This crossing was surprisingly easy. We basically walked right through after some minor paperwork and buying our registration cards ($10 for the card and $2 for the banking fee). This is real, as we needed them later to register at our friends house in Ashgabat. We negotiated a shared cab for $5 to Turkmenabat which took about 30 minutes and were then dropped of at the train station. 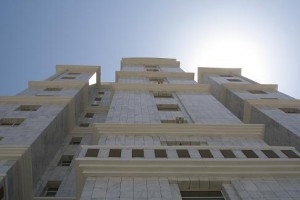 We had been told that there was a 4:00 PM train to Ashgabat from Turkmenibat daily. This was true when we arrived, but were told that familiar Central Asian (Russian) phase that tickets were HET or Finish. We were also told that we could not purchase train tickets for tomorrows train until 9:00 AM the next day. It was only 1:00 so if train tickets were already HET for the day, we figured they would be HET for tomorrow too after a $50 a night hotel stay. Instead, after a little bit of negotiation, we found a car to drive us to Ashgabat in 8 hours for $18 a person. This seemed much better than paying for a hotel in the off chance that we would actually get tickets the next day. The shared taxi was a very nice Accura with leather seats and air conditioning. We were a little shocked and thought that perhaps we overpaid. However, upon arrival in the outskirts of Ashgabat only 7 hours later, the other man who shared the cab ride with us paid close to the same fare. Even better, he spoke a little English and agreed to help us find where we needed to go.

There is not much to say about the car ride to Ashgabat as the back windows were tinted. Lauren got a lot of sleep and I read a book. I will say, that Turkmen hospitality and friendlyness has been amazing so far. This was a much needed releif after our month in Uzbekistan. There were no hidden fees or any scams, we simply exchanged money with the driver, shook hands with our left hand over our hearts (a Central Asia custom I’ve noticed so far) and said Rackmet (sp) which means thank you from Kashgar to Ashgabat apparently. Our friend’s place was easy to find as our jaws were dropped driving through Ashgabat, Turkmentistan – also called Absurdistan by many who visit – and it does not take long to understand why. White marbel palaces, streets filled with countless fountains, and absolutly ridiculous monuments erected by the notorious Turkmenbashi and his predecessors. Navigating by famous landmarks like 40 legs, the Ruhnama Monument – a monument in the image of the book which Turmenbashi wrote, and independence square. Needless to say, we showed up on our friends doorstep about 12 hours earlier than expected and were welcomed by surprised faces.

2 thoughts on “Into Turkmenistan by Foot”