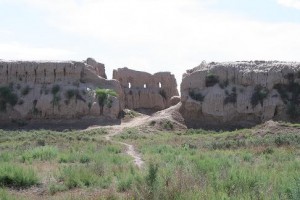 Just a daytrip away from Urgench or Khiva, the “Golden Ring of Ancient Khorezm,” should not be missed. Although some may disagree or are less willing (Lauren) to venture out into the middle of the Southern desert of Karakalpakstan in the middle of June… I was excited. If you can find enough people to fill up a car, for as little as $15 per person, you have a driver for the day to take you out to all of the ancient, but recently rediscovered, ruins of the ancient Khorezm. Now deemed UNESCO heritage sites, the sand castle forts just north of Urgench vary in size, but several are over 2000 years old and still standing. All of the names of the fortresses are in Karakalpak, so please bear with us for pronunciation and translations. We were fortunate enough to have some great company for this trip, Olga and Torstan, both who translated from Russian into German and then into English. Therefore, some things may have been lost in translation, but perhaps they may see this post and add some extra details in the comments.

After a few hours of driving and crossing a temporary bridge over the Amu-Daria – which flooded unexpectedly and not in aid of the withering Aral Sea – we arrived at the fort of Guldursun. All that we left of Guldursun was the massive city wall around the city, still intact enough to walk on top of the wall. According to our guide, until about a century ago, tunnels led from the nearby village under the wall and into the ancient city fortress. Guldursun even has a Karakalpakstan Romeo and Juliet..ish fable.

The fortress of Qoy Qyrylghan Qala, (4th century BCE) which translated to something like “goat death fort,” has some disputed historical attachments. It is, however, the oldest fort in the region so far discovered. The fortress contains several dugout compartments in which archeologists have discovered hundreds of goat / sheep skeletons. Locals claim that farmers kept their flocks there and a flood caused them to drown. However, some archeologists believe it may have been a pagan ritual temple. This was off the beaten track but still had several pottery shards and fragments sticking out of the mud.

One of the most impressive of the forts was the Ayaz – Qala, which is near a yurt village on Lake Achka-Kul. This is actually a collection of three forts with still accessible tunnels and mud bricked hallways. This fort offered amazing views of the lake and the lower surrounding forts as well as the road to nowhere, which is 400 km of nothing until one reaches Kazakhstan. However, my personal favorite was the Toprak Qala. The Toprak Qala was a massive complex that was the temple complex of Khorezm rulers in from 300-400 C.E. This qala had massive storerooms, streets, doorways, and rooms that were still intact. It was an amazing experience to look over the fort from the wall and see where the top had collapsed into hidden chambers below that have yet to be excavated. Full rooms were intact with visible fireplaces dug into the walls. The Elliq-Qala were definetly the highlight of the area and there was undiscovered history below our feet as we walked around inside of some of the oldest ruins on earth.

On our drive back, we stopped near on the of “Virgin Lands Campaign’s” canals – which has diverted the water away from the Aral Sea – and went swimming in the cold branch of the Amu-Darya.