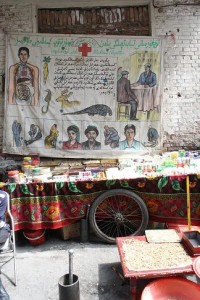 Having decided months ago to avoid going through Kyrgyzstan because of reported troubles foreigners were having at the Chinese-Kyrgyz border, we found ourselves last week in Kashgar. We took a two day trip out to Tashkurgan on the Tajik-China border which was apparently equidistance from Kashgar as the Kyrgz-China pass. We met two travelers from Australia (“Aussie, Aussie, Aussie, Oui, Oiu, Oui!”) who had already attempted the crossing once only to find the pass closed without explanation from either side. They tried again the next day and we never saw or heard from them again, which probably means they are in Kyrgyzstan. We have heard rumors across the traveling community that it is a difficult move to make, with a pick-up required at the border by a certified Bishkek or Osh agency. We decided while still in Shanghai to avoid the headache and simply backtrack. It was not until we got to Xinjiang that we realized the backtrack was over 24 hours in length and requiring a great deal more money that was amusing, as well as a bit more irony and, once again, we would find ourselves waiting in Urumqi (as we did for a week in 2006).

Having spent our last day in Kashgar walking around Old Town and then enjoying a fine dining experience at Fubar, our favorite home-away-from home in Kashgar, we hopped the daily 3:20 to Urumqi, an overnighter that lands in Urumqi at 3:30 exactly. Our train was running two hours early so they pulled off the tracks for two hours to arrive on time. Very efficient!

Back in Urumqi, we easily acquired tickets for the train on the evening of the 16th. We were incredibly lucky. We bought a 3 day transit visa through Kazakhstan from the 17th to the 20th. Our midnight train put us at the Kazakh border at exactly 9am on the 17th, we could not have planned it better if we had actually, ya know- bothered to plan.

In Urumqi between the 14th and the 16th we spent a peaceful and quiet few days in one of our favorite cities walking around the parks, eating local cuisine and relaxing at the hostel. On the 14th we went, with a friend from the hostel, to the Uyghur Wuyi Night Market. We arrived a bit early and watched as everyone set up their mini stalls. A sudden and severe flash storm swept through the market, causing customers to hide in nearby stores (as we did) and vendors to pack up their raw meat and head home. The next evening, the 15th, we went back to see what the market was like without lightening and terror and had a lovely meal of lamb, nan (bread), and kabab veggies. The 16th rolled around quickly, and we packed and headed for our train eagerly awaiting our trip to Kazakhstan and our border crossing.

China hospital Kashgar travel Urumqi Xinjiang
Previous Post"Excuse me, do you have the swine flu?" Next PostThe Hostel Reviews

One thought on “Kashgar to Urumqi: The World’s Longest Backtrack”