Kazbegi is a mountain town nestled smack dab between South Ossetia and Chechynia, in northern Georgia. All around this peaceful and beautiful valley wars rage off and on while the serenity and peacefulness of this particular town and the surrounding mountains has been maintained for generations on end. Indeed, in times of turmoil in Tbilisi, artifacts would be rushed to this region for safe keeping from any invading force or political what-have-you.

I was hesitant to go north due to State Department warnings and because I read the news regularly and know that the border areas are about as stable as a three legged dog. But, after meeting several Georgians, travelers and even government workers who vacationed in the area, we felt assured, and packed a small bag to take with on our journey north.

The bus careened up a road in such disrepair that it does not deserve to be called a pathway at all. Our bus’ tires screeched along pebbles mere inches from drop-offs that would have decimated any vehicle unlucky enough to fall over the edge. They would have a hell of a time searching (and identifying) body parts should the bus tumble out of control. Rather than harp on the uncontrollable, I shut my eyes and woke up occasionally to the sounds of honking, squealing tires, and eventually, of the parking break. 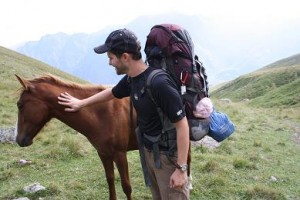 Kazbegi was the classic cowboy town, with one main street through town (littered with cows on their way to greener pastures) and lined with tiny shops, cafes, and a few hostels. We bypassed all of these and found a café on the outskirts of town where we ordered a few beers and the only item in English on the menu: Plate of Meat.

After eating, we climbed the mountain behind the town to the church, which is where religious artifacts are kept in times of trouble. With heavy packs, the walk was grueling, but we made it fun with chatter and joking until we suddenly emerged from the woods to see the clouds breaking and light pouring over the tiny church as if God was peeling back the clouds for a look.

Strangely enough, when I entered the church a man approached me with a wrap-around skirt that he insisted I put over my jeans. Apparently the Orthodox church likes women to have their head covered and a skirt around their legs. After traveling through several Muslim countries, I was shocked that this was the most conservative religious experience yet: I was in long pants, hiking boots, a sweater, a head-scarf and now a wrap-around skirt. I looked ridiculous. I’ll never understand traditions like this, unless you grow up with it, it just comes across as odd.

We set up camp near the base of the church, and Mike made a small fire so we could cook some ramen noodles and tea (our camping staples) before watching the sunset and climbing into our sleeping bags and falling quickly asleep.

One thought on “Kazbegi Mountain”