Living in a Mongolian Yurt 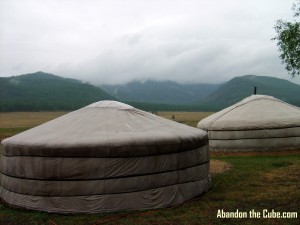 Once we had arrived in the capital of the national park, which was just called Terelij, a very Russian sounding name for a town full of Russian influence, we found a kind man with a boyish face named Billig who took us to his yurt camp and installed us in his spare yurt. No prices were mentioned as he called his wife on his razor cell phone and a beautiful Mongolian woman set off across a vast empty field in high heels and a denim skirt and introduced her self as ‘wife.’ The couple spoke little English, but what they could speak they had learned from a children’s English manual Billig had gleaned while working with a gold exploration company that also employed an American.

Billig’s camp was composed of three large yurts. A yurt is a round tent made of sheep’s wool with a tiny wooden door and a hole in the top for a small pot-belly stove. The floors inside were bare cement atop dirt, and the walls were pieces of wood holding up the felt. Our yurt had several wooden beds with blankets folded atop them as beds. A small stove in the center and a table that was no higher than a foot off the ground with mini chairs to match. Billig showed us the yurt with great pride, pointing out the great construction and bright colors and especially showing us a blanket from Kazakhstan, his home country. 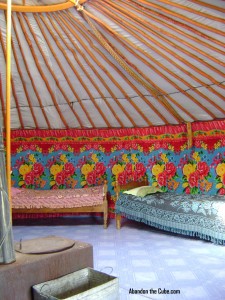 His wife cooked the small group a nice meal of noodles and mystery meat with tiny pieces of carrot and giant bowels of goat yogurt. She talked slowly but with pride. She had gone to university in the country’s capital and studied finance. She listed the words she knew in English, “Book, eat, much, woman, husband, money, bank and food.” She was a wonderful wife, and the two were like teenagers with their constant side-long glances, giggling, kissing and occasional prodding. Billig pretended to taunt the woman by demanding she cook us a delicious meal. She responded with mock hurt before throwing a wad of noodles at her husband.

The couple had two rather massive dogs, which Billig claimed were his sole hobby and passion. A German shepherd named Bruno and a rather scary bull named Kazak. The giant dogs rested their chins on the door frame while we ate dinner, and after the meal attacked their owner with friendly play and he wrestled them in his small, fenced in yard. The yurt camp looked out over rolling hills, a large empty field lay before that and several horses grazed in the area. An outhouse lay 200 yards out in the filed, and the wife took off in that direction, throwing clumps of sod back at the dogs as she went.

That evening, exhausted form the march from the broken-down bus to the town, we fell asleep soundly in the hard wooden beds, near a warm natural fire in the cleanest and most beautiful air we had breathed in years. It was as if we were in heaven. Billig and his wife knew how lucky they were to have such a place, in such a perfect location, and the couple stood in their yard starring at the stars and smooching as we slept.

6 thoughts on “Living in a Mongolian Yurt”