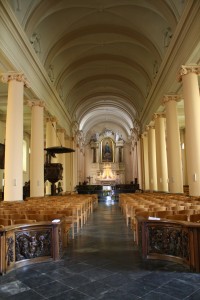 Crossing into Luxembourg was an exciting experience, and the car filled with wild cheering and hollering as we officially left Belgium. Few places inspire you to exit more hastily than Belgium…. Perhaps Belarus, from what I hear.

Anyway, there was an instant change when we entered Luxembourg. There were tall, handsome evergreen trees lining the road, which was black tarred and without imperfections. The first town we came to looked like a movie set, with perfectly matching paint and trim on every house, so that it looked almost pre-planned. The hedges were groomed perfectly, and there were signs clearly marking the way. An earthly utopia might closely resemble Luxembourg.

Meanwhile, the people were highly intelligent, friendly and eager to chat. Having decided to look for a relatives of Mike’s gravestone, we headed into Mersch. A quick stop at the gas station (immaculate, by the way) proved Luxembourg deserves the hype. I whipped out some German I hadn’t used since High School and in complete style I smoothly asked how to get to the cemetery. The woman behind the counter blinked at me, not understanding and in the background a small peep made me turn to see a girl stocking the shelves. I walked over and she introduced herself in English, without even the slighted accent. She could have been from Pennsylvania, which in fact was somewhat true since she had done a study abroad there in her youth. Her English was perfect and she helped us pick out food, microwaved it for us in the gas station kitchen (yes, you read right… it was THAT nice a place). I asked her how to get to the cemetery (the town being so small there being only one) she gave us directions that added to the charm of Luxembourg. “You go down the road to the left, past a strange dragon and a castle on the right, and then the church will be behind that.” I was eager to see this strange dragon and castle, so we finished our lunch and said goodbye.

At the church, we easily found the cemetery and walked between the tombstones looking for the family name. It was not to be found. We were looking for someone in the late 1700s but all the markers were new. I asked where an older cemetery might be, but no one knew. This was puzzling, and we never did find an answer. Perhaps they simply build atop older graves? Disturbing thought. More likely there was an older church elsewhere with its own cemetery, but with limited time in Luxembourg we decided not to drive around the hillside looking for it.

Sadly, we had to make hast to the Czech Out Party, so we didn’t linger in the graveyard once it started to rain. Instead, we jumped in the car and discussed what could have happened to the older graves.

Luxembourg is a small country, but not without extreme charm and excitement. Of all the places we’ve been I’m most eager to return to Luxembourg and Bosnia & Herzegovina. We drove on through wooded streets and immaculate highways until we eventually entered Germany. Only a country like Luxembourg could make Germany seem disorganized in contrast.