Mike to the Rescue

The other day Mike and I were buzzing around on our super sleek moped. He calls it a motorcycle as his man points don’t decrease when saying “I’ll be there on my hog!” but they sure do when you use the words “scooter” or “moped.” Anyways, we were on the “motorcycle” heading to the other side of town when we saw a curious, and heart-wrenching sight. 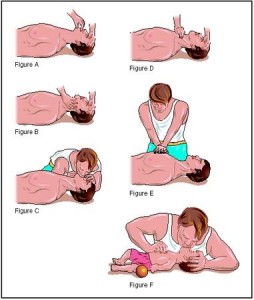 A woman was lying at the point where the sidewalk meets the pedestrian crossing of a very major intersection in Beijing. Her legs were straight out, her arms were by her side. A local man was bent over her lightly pushing on her chest and looking around with a bored expression while texting on his phone. Every once in a while he’d blow in her mouth. She was imbobile.

We parked the moped and Mike, who was once a lifeguard at a swimming pool, ran over to get the local man off the lady and administer CPR correctly. Not only was he pushing her chest incorrectly, but he was essentially just blowing air into her mouth, none of which would be reaching her lungs.

I’ll pause here to point out that I didn’t notice anything wrong personally other than how bored the man looked. Mike was in a panicked rage as he jogged over and checked the woman’s pule. She was alive! And not only that, she was breathing normally. The man’s feeble attempts at CPR were endangering her much more than helping. I’ll pause here again to point out that after this incident I looked up how to do CPR, and now I can safely say that the dude had clearly seen it on a movie or TV show and was trying to mimic what he’d seen.

Mike asked what happened and it was revealed that the woman had suffered a seizure and fallen over. Unsure what to do (or what a seizure was) a crowd gathered around the woman’s body, which was locked up and nearly paralytic from the shock of the epileptic fit. Since she was non responsive, they assumed she was dead or dying. There was no telling how long she’d been there except to say that it was long enough for quite a massive crowd of onlookers to have accumulated around her seized body. The show was made all the more fantastic for the onlookers with the addition of a frantic white man pushing his face against the Chinese lady’s body and holding his fingers to her neck.

Once Mike determined that she was okay, he instructed the crowd not to touch her, he turned her head in case she vomited, and made sure she had room to breath while awaiting the ambulance someone assured him had been called.

An ambulance pulled up, with several EMPs jumping out hauling a defibrillator. At this point Mike vanished into the crowd and dashed back to the moped. There are horror stories of lawsuits and legal charges against people who are attempting to help a victim on the street in China. We zoomed off and listened to the ambulance siren as it whisked the woman away. There’s no telling how much air was in her stomach from the inaccurate CPR, or if foam and saliva had been blown into her lungs, exacerbating the woman’s plight.

The strangest thing about this whole story isn’t how strange it is. It isn’t how feebly the one man helped, or how an entire crowd gathered to watch but not assist, or even our shock at seeing our very first ambulance in China — in three years! The strangest thing was that the day went on and as with most things in China, this bizarre event was quickly forgotten and it wasn’t until the next day that Mike remembered what had happened and told the story to a friend of his at the bar.