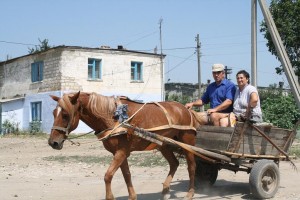 Rumors are not always proven true, and that was the case for us in Moldova. We had heard it was the most corrupt and difficult place to travel in, and many other rally teams were stopped and forced to pay bribes at the Moldovan border. Nevertheless, we wanted to see the countryside and the vineyards that are so famous in Moldova, and decided to risk the hassle to see the sights.

Moldova was the first real border crossing for us on the rally thus far. Most EU countries don’t even stop, let alone slow down the cars when they cross the borders. Romania pulled us aside for a few moments to stamp our passports and look in the back windows, but only in Moldova had we encountered any real hassle or search. Pulling into the border area we immediately began hiding our expensive gear and money in case they decided to search the car thoroughly. Our team decided that Lauren should carry the money and do the talking, as people are less likely to try to extort from a woman. This theory proved correct. Lauren walked into the office with a smile and handed over the passports and car registration. The guards demanded something and stuck their palms out. She smiled and eventually they moved their chair over and asked her to sit down. They even turned on the air conditioning and asked if she wanted anything to drink. She typed their information into the computer system (which was entirely in English) and registered us herself, the border guards having so much trouble reading our documents in English that it ended up saving precious hours.

Next, a guard approached the car, but with Bill and Mike still seated inside it gave the impression there was no room for anything else in the car, which is in fact mostly true. Eventually they tired of our tireless smiles and waved us through the border. We waited out of the line of sight for the Face Race team to catch up with us. They had to purchase road insurance at the border, while our European insurance covered us.

Moldova, in the southern separatist region we visited, was entirely countryside. We drove through two small towns, stopping once to ask directions. Everyone was friendly and calm, and waved at our silly cars as we passed through their remote townships. The countryside itself was entirely filled with vineyards and rolling green hills. The roads were decent quality, and someone had planted trees along the main routes for shade.

Reaching the opposite southern border crossing into Ukraine, we were decidedly tired of dealing with customs officials. Despite our tired looks and exhausted expressions the guards managed to do a once-over on the car and of course check our passports and car registration yet again. We had signed into the country on computer three hours earlier and now signed ourselves out of Moldova, problem and bribe free. Great success! Now let’s see how Ukraine goes….