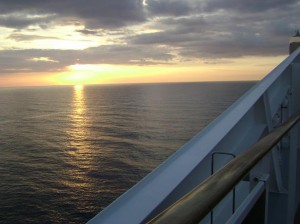 We took a 17-day cruise from Venice to Ft. Lauderdale on the MSC Poesia, which had stops in Italy, Tunisia, Spain, Portugal, Virgin Islands, Puerto Rico and the USA. We got a last-minute discount deal, which resulted in our tickets being roughly the same cost as a one-way ticket from Italy to the USA would have been and included 100 GBP of on board credit. Here is our assessment of the cruise:

For the amount we paid, we got a deal on transportation, food and lodging as well as getting to see a few more sites on our way back to the States. However, MSC cruises is not your average cruise line, it began as a cargo shipping company and continues in that capacity with most of the ships in its fleet. Perhaps as a result of those origins, everything on the ship is bare-bones. Everything costs extra, including water. This had the effect of angering a large number of the passengers, who are frequent cruisers and complained that the ‘cheapness’ of this particular cruise line was beyond annoying. Naturally, we did not care much, having literally backpacked our way through rainy Eastern Europe to get there, and were simply happy with having a room and food provided daily.

The food on board was fantastic and we were fattened up quite a bit while on board those two weeks. I imagine a kitchen staff that never leaves the galley from sunrise to well past midnight. It would have been nice, however, if drinks were included, and I don’t mean just alcoholic drinks, all that was available was water or iced tea. Alcoholic drinks were around $10 USD a pop, and hence entirely un worth it. The staff in our area were fantastic, both were from Indonesia, which I am excited to visit someday since our waiters were so friendly and attentive and downright fun.

The design and layout of the ship were nice, if not delightfully circus tacky. The evening entertainment shows were decent most nights, but some shows were so bad that one was left with a tingling sensation like when you first get up from the dentist’s chair. Their low-budget female singer who appeared on stage almost nightly was so bad that people would walk out when she came on stage. We were surprised that there even was entertainment, so we were happy with whatever we got, but cringed along with everyone else every time this lady singer tried to hit a high note and missed. Now I know how Simon Cowel feels.

The MSC Poesia was labeled a Texas Hold ‘em cruise, which is a poker game with no limits. On board there were daily tournaments, but buy ins were 120 Euro, much more than we could afford to wager, especially given only a few people showed up daily to play. This was a real disappointment as we had planned on making back some of the cruise costs at the tables, only to realized the risk outweighed the potential gains with only 4-6 other players buying in at 120 Euro – the pot wasn’t big enough for the gamble.

In all, we had a great time on the cruise and it was a good way to get healthy, fattened up and ready for our return to the USA. Having backpacked for the last 6 months, it was luxury we were not accustomed to, and we took advantage of the time to relax and rejuvenate and bunker down to have nice old fashioned dinner-table chats with the lovely Canadians at our table.