Nohur The Last Call to Prayer

The small and relatively untouched village of Nohur rests in an unmarked valley of the Kopet Dag Mountains, which make up the border of Iran and southern Turkmenistan. The people of Nohur dress and act conservatively, and their traditions have been able to survive Turkmenistan’s modernization because of the remoteness of their village.
Descendent from Alexander the Great, the Nohurli are surprisingly hospitable. We arrived at 6pm via 4X4; the only way to reach the town is down a long pebble road flanked by shale mountains covered in lizards. As we rounded a desolate corner, we were amazed to find a small village awaiting our arrival. Damat jumped in the back seat and smiled as he pointed up a narrow alley. The engine was gunned and we bumped along on our nearly vertical assent up the northern face of a hill in the middle of Nohur.

The roads were little more than compact dirt and rocks where water had once drained from the hills, yet a village had found this method of road making suitable to their needs. Large adobe houses sat firmly on their wooden beams (though where the wood came from was a mystery is this desert landscape). Children and elders dashed in front of the 4X4 to look at our pale faces as we pushed them to the glass to return their eager stares. Finally, with Damat pointing out the window and whispering the village’s secrets in Russian, we stopped at his hill-side home. 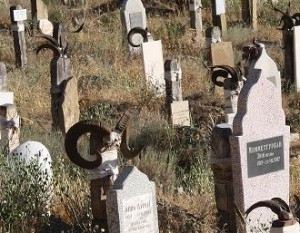 Damat introduced us to his wife and granddaughter. His wife, an elderly woman with all gold teeth and sun-damaged skin, grasped my shoulders firmly and planted three or four wet kisses on my neck before running her calloused hands across my chest and smiling at me. I stood shocked for a moment before I could smile back—chest rubbing was not a normal Turkmen greeting, this must be native to Nohur. Damat, thankfully, just shook my hand, and his granddaughter simply hid behind his leg and peeked out from time to time to look at my reddish hair or my white fingernails. She was a beautifully, frail child of about eight, dressed in bright colored western clothes that contrasted sharply with her grandmother’s traditional dress and headscarf.

They settled us into a small, empty room and set up a tarp on the floor. They piled bread, butter, home-made cheese and other treats on the tarp and poured us each a hefty cup of tea. Damat sat cross-legged on the floor and began to talk adamantly, using gestures as much as any homesick Italian. We ascertained that he wanted to show us around town in the morning. Since we already had onward travel plans he agreed to take us on tour of the area tonight. He jumped up and yelled for his granddaughter, and we were off.

We bumped along a dirt road that looked little used and likely to peter-out into a rock drop off, but Damat continued to point out the window and insist we crawl forward, no matter how much the Jeep leaned to one side. Though we were threatening to topple over, Damat insisted we continue to the city’s graveyard. The graves cannot be explained as we did not understand Damat’s gesturing, but suffice to say that each headstone had a ram or gazelle’s hors firmly tied to the peak, giving the cemetery a warrior-like feel.

We bumped along the road at a 40 degree tilt to the right until we reached a lone house on the hill, we got out and walked up the steep steps to find one of the oldest surviving trees in Central Asia, which is covered in bits of cloth representing villager’s wishes (mostly for a male child). The steep steps led further up the hillside so we traversed them to find a small cave claiming to be the resting place of Kyz Bibi. Legend has it that when an invading force was nearing this unfortunate woman prayed that the mountain would swallow her up rather than allow her honor to be challenged. The mountain obliged and the tiny cave that remains is testament to Kyz Bibi’s bravery. 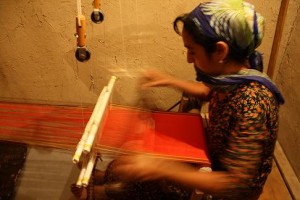 We continued on our Nohur journey deep into the ravine and then urged the Jeep forward and onto a flat plateau. After 12k we disembarked in a small ravine filled with cows, toads and lizards and marched down the hill following Damat and his granddaughter. They led us through the brush to a clearing made entirely of rock. Damat grinned as he led us right to the edge of the rock plateau and pointed over the edge. “This is easily a 100 foot drop-off” I thought as Damat held his granddaughter’s hand so she could lean way over the edge to catch a glimpse of the waterfall. I snuck a peek as well, the water was pouring out of mountain seemingly conjured from out of nowhere. A small trickle of water ran across the top of the plateau, but this was hardly enough to feed the waterfall. Damat, though easily in his seventies, quickly scaled down the side of the rock face for a better view, with all of us skeptically in his wake. The view was dangerously beautiful, for as you looked around you started to waver from awe and could easily “ooh” and “awe” your way off the edge. We sat for a while, the lizards scurrying in the background, and listened to the falls.

Back at the house Damat’s wife had prepared plov and tomato salad for dinner. Damat waved her away good naturedly and steered us to a house nearby that was his son’s. Inside a frail but beautiful girl, his daughter-in-law, was weaving silk. The loom stretched from one wall to the other, and required amazing dexterity as she pumped the loom with her feet and passed the shuttle with her able hands. The silk takes several days to make, but they wanted only $20 per piece, which is about 6 feet long. We watched her work for several minutes and then easily coughed up the money for a fine piece of blue silk. 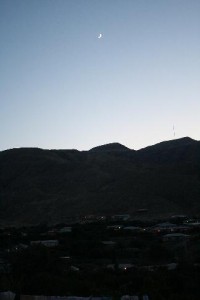 Back at Damat’s house, his wife had set the tarp out on the roof of the house so we could watch the sun finish setting. We all took our places on the floor around the tarp and began to eat. “What is that thing?” I yelped before I could control the urgency in my voice. Mike looked over and caught a quick glimpse, “it’s a scorpion!” We sat silently looking around, our heads rotating like an owls. I grabbed my notepad and quickly sketched a scorpion and showed it to Damat, who leaped up with an agility that shocked me, and ran to the spot. The critter was long gone, but Damat informed us that they were very bad, and we should be careful. We sat on the roof into the late evening as the sun gave way to the moon and a blanket of stars filled the sky. Nohur’s lights came on one by one as we watched, and soon the whole valley was specked with soft yellow bulbs. Late into the evening a chanting rose from the valley, the last call to prayer. We watched the stars circle the mosque as the moon dipped behind a hill, and listened to the chanting prayers of a devout village, a hidden village, as it prayed its way to sleep.