Nohur to Turkmenbashi on the Ripples Roadway 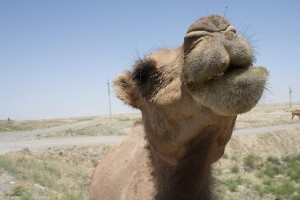 Last night in Nohur we slept on the floor, atop rugs and a small pad. Throughout the night we slept off and on as dogs fought in the alleys and cats cheered or booed their progress. Scurrying lizards awoke me with fresh fear for scorpion attacks and we could hear the rushing gas in the pipeline outside the window. The only bathroom was down a winding, unlit alley and was little more than a hole in the ground with a door. At 9 we were up and packing the Jeep while Damat and his wife made us a lovely potato and egg breakfast with tea.

We took pictures with the family before our departure and Damat’s wife again kissed my neck and brushed my chest with her hand as we pulled away. We bumped along the lizard valley until reaching the main road that stretches lazily across Turkmenistan, from Ashgabat to Turkmenbashi, on the Caspian sea. Though there are only two major roads in the country, it was in a state of utter disrepair, and we bounced along the spine-adjusting road with care. Now and then we would see something of interest and the car would screech to a halt for further inspection. Our first caravan of unmanned camels represented an awe-inspiring moment where I realized the silk route was more about patience and fortitude, and man challenging nature, than about commerce. The men who rode the goods through this desert were fighting a force larger than man itself, and had to face amazing hardship with bravery bordering on insanity. The desert was dune-less but equally as barren as the Taklimakan. Here and there a small bush grew, and under it lizards fought for shade as spider’s weaved their webs overhead. Surprisingly the desert is full of life. We passed so many camels that after a while, I sadly lost track. Interspersed with these were sickly looking cows and healthy looking donkeys. Goats and rams were herded by lone men, whose weather-beaten faces looked like leather. All the while, with my face pressed against the window, we sat comfortably in our air conditioned 4X4.

Comfortable is a stretch, as the road, which was paved and then touched up with blacktop, had baked in the sun so that every car going west was pushing the melting tar and gravel into ripple-like clumps. Every thirty feet there was another blown out tire resting by the road, a testament to the unreliability of the road. We had a spare, but only one, and the frequency of tires indicated that we should have brought a replacement tire for each good one already wearing down underfoot. 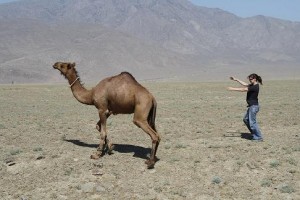 Despite the bumping, jarring and wavering of the road, the scenery was right out of a lunar adventure novel. At one point we stopped the car so I could attempt to pet a camel. Silly foreigner. I ran after the camel with my arms outstretched, hoping to convince the camel of my good intentions. I galloped after the camel at full sprint, yet it managed to our maneuver me and escape my petting. At another screeching halt at my bequest, I managed to feet a camel a piece of bread. The baby camel apparently disliked the flavor, for it promptly spit the piece out onto my shoe and ran off laughing. I followed it and again attempted to inflict petting upon the camel, but it resisted and ran off into the desert to look for shade.

The drive from Ashgabat to Turkmenbashi is 9 hours. At some points in the so-called ‘road’ you can travel no faster than 10 miles an hour. Thus, when we glimpsed our first of the Caspian Sea there were sighs of relief all around. The Caspian, from the west, is a sharp blue-green that contrasts so drastically with the paleness of the white desert that it at first causes one’s eyes to water. It is a truly beautiful body of water, and we followed its curves as we headed north to Turkmenbashi, eager to take a dip in its turquoise waves and wash off the camel spit.