We went up to the Beijing 2008 Olympics on a sudden impulse. It wasn’t because we were so much swept up in the fervor as just tired of feeling left out. On a Wednesday evening we were watching the Olympic men’s gymnastic team competing and looking at the crowd of screaming, crying fans wondering if we’d ever be so gullible as to scream for nationalism.

Apparently we are. Thursday morning I told my boss I was thinking of vacating the office early that day. I called Mike and propositioned. Naturally with a little sweet talk and some womanly maneuvers I had him agreeing to an overnight train ride to Beijing in no time.

I left work that same evening at 4pm on an excuse of packing and passing out business cards. I jogged to the Shanghai subway and boarded the metro—itchy and anxious for another adventure. It felt like I had been stable for far too long (though it had only been two weeks!).

When I got back to the apartment I was ecstatic with energy and adrenaline. I walked in the door, and embraced my baby. 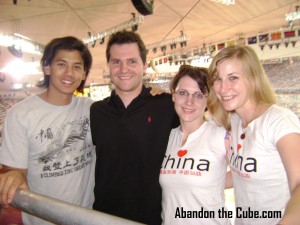 After a shower we realized we had no time to properly pack, and each threw a few shirts into separate backpacks, grabbing toothpaste and random accessories as we reached for the door. We were nearly late getting to the Shanghai rail station because our cab driver (an over-weight smoker from south China with a thick local accent from years of fitting in) pretended not to know the fastest route north.  Eventually, and several mini- panic attacks later, we arrived just in time to race down the tarmac to our train car.

Boarding our car, we were encountered with a stench that can only be described as ‘travel smell,’ it’s a disgusting mix of body sweat, excitement and laziness. I love it. Imagine sawdust and a urinal, mixed with egg whites and a bit of bark.

Our bunk (it was a sleeper car) was in the middle row, car 6, bunks 3 and 4 to be exact. Bunks come in rooms of 6, with one and two on the ground level with two above that and two more hugging the ceiling. The middle row has a nice view of the scenery.  I lounged in my mini-bunk, reading ‘Men without Women’ a Hemingway book my father had recently sent me from Afghanistan where he was working. I nearly finished the book when exhaustion and excitement mixed inside me and made me fall asleep, the book resting on my chest.