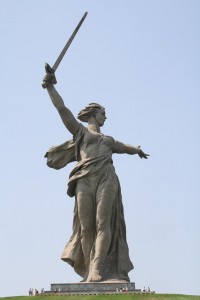 Imagine you have just jumped out of a hot shower on an extremely hot day, and then you plug in the hair dryer on high heat and point it right at your face. This is the closest parallel I can think of to explain the unending and abusive heat we felt on the road to Volgograd from inside the Russian border. Perhaps, once your hair is dry, turn the oven on max and pull a chair up and open the door. Waves of heat so powerful they make your eyes water (well, until you run out of eye moisture that is) spilled into our tiny cars. Naturally, we had no air conditioning and having the windows open only made the heat pour in more quickly. We closed the windows and sat in our mini car sauna as we sped along roads that were literally melting from the heat.

Eventually, and it did feel at some points like we might not make it through the waves of heat, we arrived in Volgograd. Having spent several previous evenings in other towns running around lost in the city looking for a cheap hostel or hotel, we decided not to deal with the hassle this time. Mike, Bill and I left the hostel finding up to our trusty convoy mates, and we three purchased ice cold beers and sat outside on a park bench, playing the ukulele (no one threw money in my Mongol Rally fund for the free music, I’ll add) and hanging out. Over the next several hours we consumed a few more ice beers and with every passing hour more ralliers joined our park bench party. By late evening, we had roughly fifteen ralliers from several convoys. It was a relaxing and pleasant evening, but we still had no place to stay. Mike jogged off in search of a hostel and came back with news of a hotel for $45 a room. Not cheap, by any means, but we took it, showered and cleaned up from so many days on the road and all met at the bench an hour later for dinner. 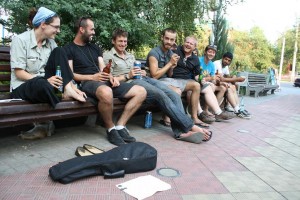 If you happen to look at a map you’ll notice we went out of our way to get to Volgograd. Once there, however, we found it a bit of an irritating place to travel. The roads are congested and of poor quality. The people are not especially helpful, but are a bit appreciative of our attempts at speaking in Russian. We discovered we needed to register within three days of entering Russia at a hotel. This, we found out, was not easy to do if you decided not to stay at a hotel. Bill slept on the floor in another team’s hotel room, so in the morning we had a bit of a run around trying to get a hotel to ‘register’ him without him paying. Eventually our hotel did it because they confused Bill with me as the second person in the room. Jackpot.

That morning we all went to the fancy hotel where the other rally teams were staying and ate at their continental breakfast. They didn’t catch on that we hadn’t paid to stay there. We used the internet to send our families messages of arriving in Russia, and then jointly decided that since we were in Volgograd, a trip to the Stalingrad monument was in order.