We’ve been looking all over for a place to buy a ferret. Yeah, I know what you are thinking, why buy a pet when you will just have to leave in a few years and possibly leave it behind. The quarentine process for brinign animals from China to the USA can’t be easy, and besides, ferrets are just glorified rats. Here’s my retort, sirs: 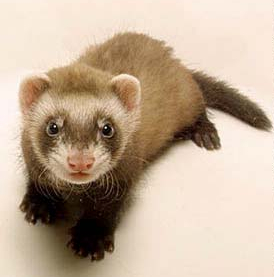 Ferrets are adorable, they do a warrior dance to signal when they want to play or fight that involves rolling around upside down and tossing their bodies side to side. If all warriors did that dance there would be no war… only massive laughing sessions followed by treks to the closest bar.

We looked at other animals as well. In 2006 we owned a rabbit in Beijing, but it quickly died. It was either sick when we purchased it from the street corner salesman who was also selling fish and toilet bowl cleaner, or he died as a result of running around or soon-to-be-condemmed apartment. He died so quickly after we got him that Mike seems to think it was his fault. I’ll go on record saying it wasn’t anyone’s fault, but it did mean that this time around we didn’t want to try our luck again with a Beijing bunny.

Cats are the best option, in my opinion, but Mike is allergic. Lame. And although I’d love a dog, how could I possibly part with that or give it away whenever I left Beijing? Ideally, the most generic and cliche animals are actually the best because they interact with humans on a high level and when guests come over they are not terrified, a they might be if a ferret ran by unannounced.

To check out our options, we went to the Beijing Guanyuan Market – The Fish, Bird and Insect Market. Obviously insects and fish were out of the question (boring, loud, boring, ugly, etc…), which left birds. I’d be happy to get a bird actually, but one that flies around and is interactive, not one of the irritating and loud ones that is scared of humans. I had a cockatiel in middle school that would fly around and land on people’s heads and eat seeds out of your mouth. I miss him, his name was Fido.

Anyways, fish and bugs were out, and the birds were mostly tiny and overcrowded, with 10-20 birds in a tiny cage meant for one animal. We also saw cats, kittens mostly, in tiny cages meant for rabbits and rabbits in cages meant for rats and so on. Only the ferrets had large cages, and they wanted over $500  USD for one ferret. We really wanted to get one, but we didn’t want to party with $500 to do so. To get to the market if you happen to be in Beijing, take the subway to Fuchengmen (line 2), take exit B and head North, the market is on the right (East) hand side of the road, just inside the Second Ring Road. It is in an old hutong, so you can walk around the maze and find food, rabbits, insects, more food, and clothing.  A nice but not appetizing combo.

One thought on “Pet Shopping in Beijing”