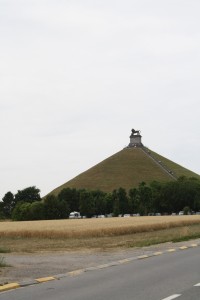 After the official launch party and race around the Goodwood track, we set off toward Dover to catch the ferry to France. We made a few wrong turns here and there and eventually made it to the ferry a mere ten minutes before they loaded up the car, along with a few other rally teams and their modes of transportation. The ferry ride was short but sweet, and we were eager to put some miles on the car once we hit land. There was no passport check or customs in France (we had heard there would be) so we drove right out of the bay and easily found the highway. Having bought a European atlas on the ferry we were now prepared to see what Europe had to offer us.

Our original plans called for a trip to Paris, but with limited time until the Czech Out Party, we decided to book it east and see Brussels instead. First mistake. Here I will insert a brief note about Belgium. When I was in high school we had an away sports game in Belgium which I had been anticipating with excitement for weeks. When we finally got there, we lodged in Formula One, the cheapest hotel I’ve ever been in. I’ve stayed in some real dive hostels and hotels in my day but nothing has ever seemed as vile as the F1 hotel in Belgium. From the carpeted hallway you step up into a closet full of water. Your weight forces the floor down a goof half a foot and the water drains. That is the shower…. A hallway closet that only drains if you stand on it. Essentially you step into someone else’s used water. In the morning we had Belgian waffles, which were disgusting and soggy like wet cake. Belgian beer was no better and Belgian chocolate was also crackly and flakey. Everything we tried to do in Belgium sucked, and since that failure of a trip in 1999 I have always been firmly against another Belgian exploration. But, since neither Bill nor Mike had been we decided it was the best option.

Here is how Belgium still sucks. We got into the country and immediately a smell struck that was like rotting carcasses. We could find nowhere to change money. We eventually found a camp ground and discovered that it was where poor folks lived rather than an actual hospice. We were too tired to care, and in the morning random strangers walked past our tent to get a good look and put in a scowl. We set off into Brussels and got massively lost. Suggestion Belgium, street signs! We got so turned around that eventually we decided to just forget it and get the hell out of Brussels. Good move. Our brief visit to Waterloo hours later was more interesting. We saw the fateful battleground and even the Lion’s Butte mountain. We toured the Waterloo museum and the nearby memorial church with stones thanking and commemorating foreign soldiers for fighting in the battle of Waterloo. We were lost a few more times before we hit Luxembourg, and once we officially crossed out of Belgium we let out a collective sigh of relief.

3 thoughts on “Reasons to Avoid Belgium”