Samarkand Where the Insects of Legend Dwell 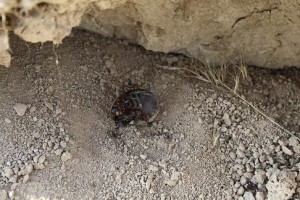 Since arriving in Uzbekistan we have seen an inordinate about of insects of every shape, variety and color. In Tashkent, upon walking into the hotel, Mike was greeted by the most horrible sounds of my loudest shrieks. I had, naturally, found a large, black spider crawling across an otherwise white wall. This spider was no ordinary creature, for it looked up at me as if to say, “hold down the noise, lady!” and then blinked.

In Samarkand I was shocked to discover a distant cousin of the creature in Tashkent. Think back to your childhood and the conclusion to the epic tale “Charlotte’s Web” when Charlotte’s millions of children climb up a wooden fence post, shoot a string of web and then fly off into the sunset to propagate. This is a common occurrence in Samarkand. Not once, but on three separate occasions I saw a spider fly past me with a death grip on a bit of web. One stuck out its fury leg and waved as it flew past my head. Mike thinks I exaggerate, but I’m happy to live in my little world of hyperbole. Regardless, it is not inaccurate to say that Samarkand has flying spiders.

After a scorching walk through the ruins of Afrosiab we decided to rest for a while at the Hazrat-Hizr Mosque overlooking the city. From here you can see the ruins of the Registan, as well as those of Bibi-Khanym’s Mosque and mausoleum. It is, without a doubt, the best view in Samarkand, but I was distracted by giant, spider-like ants. Since you’ll think I’m exaggerating, I’ll provide you with pictorial evidence. These giant ant’s back legs would shoot out like a spiders, allowing them to propel themselves at incredible speed and survive jumps of up to 1000 times its height. I know because I kicked one off a step and it landed, looked back at me to stick up its middle leg and then ran off down the steps leaping off each one and landing mid step, ready to leap again. 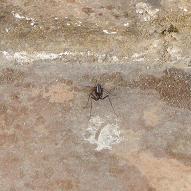 After the mosque we walked to the burial site of the Old Testament prophet Daniel (who was unfortunate enough to be thrown to the lions in Babylon at one point). Supposedly Daniel’s body grows at a rate of two inches a year, so the kindly Uzbeks have provided him with a sarcophagus that is about 9 yards long and one yard across. But I digress, at the ridiculously long sarcophagus I saw one of the most exciting/disgusting things on the planet. We had just come out from measuring the resting place of Daniel when we found a rock path leading up into the hills, we followed it to see what there was to be seen from the top. Here is what lies at the top of this holy hill, readers beware that the faint should not read on:

I saw something resembling a trilobite resting in a tiny hole in the side of a bank. I went to poke it with a pen, thinking, “Oh my God, I found a fossil!” But, when I poked it and turned it over I discovered it was a giant, recently deceased beetle being devoured from the inside out by the crazy ant-spiders I mentioned above. I did a “Gross! Gross! Gross!” dance before taking a few pictures for you. Does this beetle not look like the scarabs from ‘The Mummy’ that ate humans alive? Because when my face was 5 inches away to take these pictures that was the only thought coursing through my brain.

After a long day of adventuring around Samarkand we returned to the hotel where Mike reported to me that he had found a daddy long legs in the bathroom and was watching him hang out under the sink. Perhaps all these bugs are only interesting to me because in one year of living in Shanghai I now realize I did not see a single insect other than flies and mosquitoes- as it should be!

One thought on “Samarkand Where the Insects of Legend Dwell”