Our bus ride was somewhat of a highlight as far as nigh transportation goes. We were on the top floor of a double-decker bus, in the very front seats. This gave us an amazing, panoramic view of Serbia as we departed. We were exhausted from sleeping on the train the night before, and walking around the entire day. Once on the bus we stretched out and fell promptly asleep.

I don’t know what time it was when I heard a terrifying sound and awoke with such a start I slipped right out of my bus seat and onto the floor! I looked around but everyone else was sleeping soundly. Just as I climbed back into my seat I heard it again. It sounded like glass shattering, and when I looked up I realized that our double-decker was skidding down a mountain road completely covered in snow and ice! The sound I heard was the sound of ice-covered evergreen branches smacking into the windshield directly above my head!

I sat awake with my face inches from the glass willing the bus not to slide into the ravine on our right, or into the mountain on our left. Apparently intense concentration on a goal like that works, because I lived to tell the harrowing tale. I did not realize that there would be snow in Bosnia & Hercegovina, and the mere sight of it, as beautiful as it was, was a bit of a shock.

We got off the bus at 5:30am and discovered that it had deposited its human cargo at a station 10k from town. At 5:30 not a lot is open, so we could not change our currency. We walked around in the snow and slush and eventually found a place that had an ATM, where we got enough out to last a day. We walked around another half hour before we found the bus stop, and waited another half hour for the bus. By now my shoes, which I bought in China and have been falling apart ever since, were soaked through and my toes were as numb as if they didn’t exist. We sat shivering on the bus as it filled with commuters on their way to work. 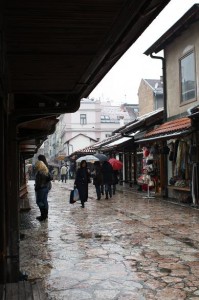 We jumped off the bus in Old Town Sarajevo, which showed little signs of earlier conflicts. We had expected a city that was brand new, having been entirely rebuilt since the war, but what we found was a delightful old town with beautiful churches, cobblestone lanes filled with shops and cafes, and a throng of pleasant people bustling about their business. We checked into a hostel for 5 Euro a night and took showers. With two full nights sleeping on buses and trains, and walking in the rain and snow, we were quite a pathetic site to behold! The shower, even on its coldest setting, burned my freezing feet until they adjusted to normal temperatures again. I huddled into several blankets in my bunk until I felt I had defrosted, and then put on nearly every item of clothing in my backpack.

Our first order of business in Sarajevo was to find me a new pair of shoes, preferably something water resistant this time! We walked around Old Town, which was full of designer clothing and brand-named goodies, but nothing in our price range. At the river, however, we found a second-hand store where a friendly local lady helped me try on several pairs of winter shoes. I eventually settled on a pair and we went back to the hostel so I could change into dry shoes. Just in case they were penetrated with snow or slush, I put plastic bags on over my socks to keep my poor feet dry.

Sarajevo was my favorite city since leaving Shanghai. It was beautiful, the locals were friendly and helpful, and it had all the efficiencies of the western world. The river that bisects the city gives it an old fashioned feel while the modernity of the shops makes you remember you are in the 21st century.

The history of the city is still alive. The bridge corner where the Archduke Franz Ferdinand was assassinated is well preserved, and a museum to the moment has been erected on the corner showing a film recreation of the exact moment Gavrilo Princip stepped out of the crowd and shot the Archduke and his wife.

We left Sarajevo after two days of restful enjoyment and ongoing history lessons, and wished we could have stayed longer if time and money had permitted.