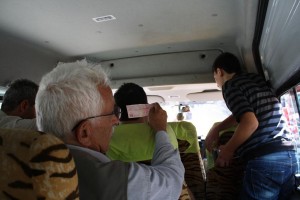 Having crossed several borders, with shady officials and legitimate ones, we have now crossed the easiest border on the planet between the Republic of Georgia and Turkey.

Georgia has no visa requirements, but welcomes everyone to their country. Turkey sells visas for $20 a pop at the border crossing, a simple sticker and a quick scanned copy of our passports was all that was needed. They did not check our bags, or fingerprint us, or ask if we had the swine flu, or rob us, or tell us their political views. It was as if we were going from one friendly place to another, which is exactly what we were doing.

We left the beach in Georgia in the morning and caught a simple, 1 GEL bus to the Sarpi border. From there we simply walked across the Georgian side with a wave and an exit stamp, and we were in Turkey! A friendly border guard pointed us to the visa purchasing office, and we bought the required stickers and got the required stamps without hassle.
Once outside the barbed-wire fence we sat around waiting for a bus. Without any Turkish language ability we were SOL for a while before someone came up and offered to take us to Hopa for 4 TL a person, which seemed reasonable. Once in Hopa we watched everyone else pay 2 TL a person and had to grin a bit. Less than twenty minutes in the country and we were swindled. Typical, but we’re not in Georgia anymore, are we! And there was something special about Georgia, perhaps the shared religion, that made the people honest and kind and unable to cheat.

From Hopa we found a nice family who helped us onto another bus to Artvin. Here is where the world proved itself to be a great leveling device. Because the other bus driver had charged us double (and we had agreed in advance) we did not have enough money for the bus to Artvin. The driver took the money we did have, which was 4 less than the correct amount, and drove us all the way to Artvin without complaint. Hence, we ended up getting there for 2 TL less than a local would have. Ironic. 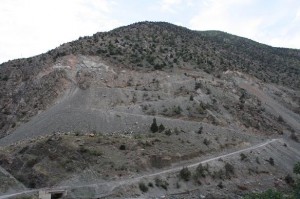 Once in Artvin we had to wait an hour for my stomach to stop hurling from the motion sickness. Hopa to Artvin was a winding, mountainous road that followed a raging river. We hurtled through the mountains without a care to the deathly drop-offs next to the bus, and without worrying about oncoming traffic or rocks in the road, or cows. I’m surprised I didn’t vomit just from looking over the edge of the cliff as we whizzed past. While we waited, our driver got in his minivan and put it in reverse and then floored it! His minivan was aiming right at Mike and I as we sat on a bench catching our breath. Everyone yelled and I propped by feet up on the bench hoping the metal frame would stop the van before it crushed me. Luckily the screaming worked and the driver got out of his minivan and looked at Mike and I (and a local sharing the bench). We still had our feet up, but thanks to the nausea we were more focused on not vomiting than not being hit by crazed, lunatic drivers.

Finally, we boarded the bus to Yusufeli, which was to be our destination for the night. We got in the mini bus (meant to hold 12, but now holding 18) and settled in for a long drive. Midway the road was closed due to an avalanche, so we all got out to throw stones at the river below us. A passenger got in the driver’s seat and put the car in reverse while trying to impress two female passengers. He rammed the minibus directly into a parked truck, rocking both vehicles precariously close to the drop off. Our driver came running, full of curses and wild hand gestures, to the passenger and berated him in front of the ladies—the opposite of his aim. We watched the whole event from the river bank, wondering how we’d fish out our belongings from the river if the car had slid in. Finally, as night approached, we made it to Yusufeli, having left Georgia that morning and taken 4 buses in the course of the day and witnessing two car accidents.

One thought on “Sarpi Border Crossing Into Turkey”